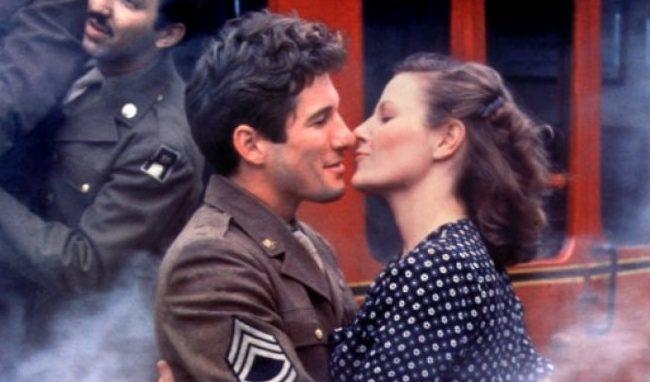 “Over paid, over sexed and over here”, originally said by British music hall star Tommy Trinder, this was the lasting phrase that marked the Americans coming over in waves between Hitler declaring war on the United States in December 1942 and D-Day 18 months later. Or as the beginning titles of John Schlesinger’s film Yanks (1979) tell us: “From early 1942 until the invasion of Europe over a million Americans landed in Britain. They came to serve on other battle fronts or to man the vast U.S. bases in England. Hardly a city, town or village remained untouched.” Directed by John Schlesinger, the director of many unique and key British films of the 1960s: A Kind of Loving (1962), Billy Liar (1963), Darling (1965) and Far From the Madding Crowd (1968) before he went to America and made Midnight Cowboy (1969). After Sunday Bloody Sunday (1971), Schlesinger never really attained the heights of these films. Indeed Yanks was arguably the last quality film Schlesinger made (dependent on your thoughts on Pacific Heights, 1990).

Yanks was filmed and set in the North in such towns and locations as Stalybridge, Halifax and Saddleworth Moor. It opens with convoys of American trucks making their way through the industrial countryside and the open jaws of the locals and flirtations from local lasses. The date at the start is not really mentioned and dates only start to gain meaning when it comes to New Year’s Eve 1942. Sergeant Danny Ruffelo (Chick Vennera) starts to date a local bus conductor (Wendy Morgan), while his friend, Sergeant Matt Dyson (Richard Gere) starts to date Jean Moreten (Lisa Eichhorn), the daughter of shop owners. Meanwhile, their commanding officer (William Devane) is dating a married woman (Vanessa Redgrave) living on an estate whose husband is away in the British armed forces.

For the repressed English, these brash Americans are very different. For Matt Dyson, his relationship with Jean is platonic and respectful. She is engaged to a local she has known since childhood who is away in the Far East. Her parents, especially the Mother (Rachel Roberts) is cool towards Matt, despite his gifts, but he remains respectful, polite and does not push himself onto Jean. By the New Year party their relationship develops but we are made aware of protest and support of opening a Second Front as we head towards D-Day and the Americans eventual departure into the unknown.

Richard Gere wasn’t the huge star that he would become a year later with the likes of American Gigolo and An Officer and a Gentleman and as a result the film, although set during the Second World War had no war action and the would tank at the box-office. This is unfortunate as the thrust of the film was about how the war affected the lives of ordinary people: the Americans who are displaced away from home and the absent British men who are away fighting elsewhere (the long standing boyfriend of Jean is briefly seen when he comes for a brief furlough), while the women most hold the home together. Both in the film, and in reality this led to women having affairs with what they saw as brash and glamorous Americans. Some of the more unpleasant aspects of America is also seen in the film in which some G.I.s pick a fight with their black fellow soldiers.

The film is nicely shot and may be overlong at 138 minutes but does move at a decent pace and is a perfectly serviceable war time set romancer. Released by Eureka Entertainment in their Classics series, the HD transfer is nice, if a little grainy with the earthy tones coming out well. The only extra is an audio only interview with Schlesinger.