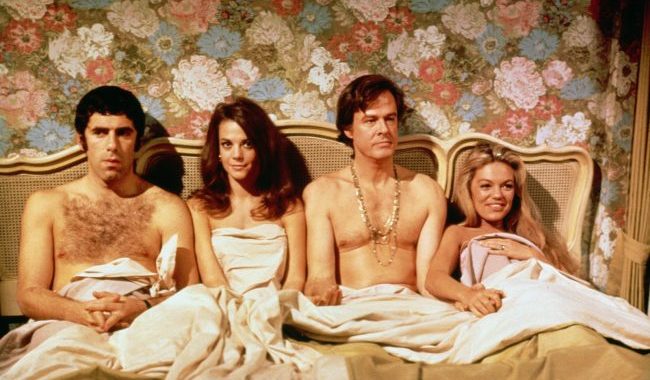 It’s hard to overstate how much the social revolution in the 1960s changed society and the difference between the 1950s and 1970s with clothes, music, attitudes to sex, race and the arts totally transformed with even drugs entering the mainstream. Paul Mazursky’s 1969 satire and debut feature, Bob & Carol & Ted & Alice highlights how this social change created nervousness and anxiety among the middle classes. For many years, as David Cairns highlights in his visual essay, the film fell out of favour and, with the fullness of time and for “those who weren’t there” the satire seems even more absurd.

The film opens with Handel’s ‘Messiah’ played to Quincy Jones’s funky mix as we see Bob (Robert Culp) and Carol (Natalie Wood) drive through twisty mountain roads to a hippy meditation and therapy retreat in the Californian hills. It would appear that the commune ranch is based off a real retreat where San Francisco hippies retreated to such places as Black Bear Ranch, but also with Fritz Perls psychoanalytic therapy. Edited between shots of Bob and Carol riding through the mountains to the modern ranch we see naked sun worshipers, people in hot tubs and others carrying out their Tai-Chi exercises. Over the course of the weekend the modern hippy middle-class couple learn to open themselves up to each other and strangers and learn primal scream. Reinvigorated by the experience, Bob and Carol go back to their modern suburban home and go out for dinner with their best friends, Ted (Elliott Gould) and Alice (Dyan Cannon). They tell them of their experiences, which is met with some cynicism by Ted and Alice and will eventually begin a conflict with the couple who begin to question their own relationship.

Bob confesses to Carol that he had casual sex while on a business trip to San Francisco. Instead of being angry, Carol appreciates his honesty and thinks it “beautiful”. When Carol tells Alice, Alice is upset which creates a division between the two couples as it begins to disturb Carol and Ted’s relationship and their own sexual tensions. There is then an exposure of Bob’s hypocrisy when he comes home early from a business trip to find Carol in bed with another man, her tennis trainer. He gets over his anger and realises that there is nothing wrong and offers the lover a drink in a wonderful scene of satire on free love. There is an indication that in this dynamic between the foursome, it will lead exactly to that, a foursome. However, Mazursky’s direction and the script with Larry Tucker goes right into the heart of what was going on in California at the time and satirising it. Mazursky was very much involved and in touch with the counter-culture having already been a co-creator of The Monkees and his connections in California. It was a very different kind of sex comedy to any that came before and most certainly tapped into the times and the zeitgeist as did other films of the period: Medium Cool (1969), The Strawberry Statement, Alex in Wonderland (also directed by Mazursky) and Zabriskie Point (1971). What sets Bob & Carol apart is that, unlike the other films that focus on protest and student movement, it focuses on how a middle-class couple has been transformed by the counter-culture as we see their everyday lives (although at no point do we see anyone actually at work, even though we know what the two men do). Their clothes, as stated by David Cairns on the visual essay extra on the disc are over the top, but nevertheless very much sit in late ’60s Californian fashion.

Culp, who at times looks and dresses remarkably like Peter Fonda wears distinctly hippy clothes in contrast to Gould’s more conservative suit and even casual clothes. Natalie Wood, meanwhile, has seldom ever looked more beautiful than she does here, as well as stylish, whereas Cannon is dressed very much in the manner of a late 1960s middle-class housewife with a disposable income.

A nice transfer, even if it is fairly grainy still with some stunning colours in a film shot by Charles Lang, it is nice to see that at last Bob & Carol & Ted & Alice has been given a release, thanks to Arrow Academy. It also benefits from a commentary track with contributions from Mazursky, Gould and Cannon and an additional one by film scholar, Adrian Martin. There is also the aforementioned visual essay by David Cairns and an archived interview with Mazursky during the making of the film.