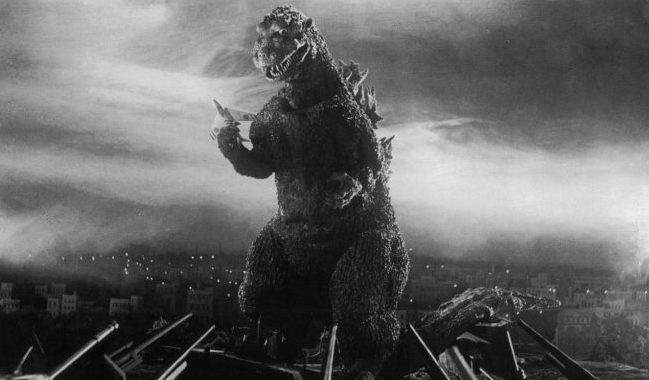 Godzilla FAQ: All That’s Left to Know About the King of the Monsters Book Review There have been many icons of horror cinema: the Frankenstein monster, Dracula, Mr. Hyde, the wolfman/werewolf and King Kong, but most of these are based off or are created from Western novels or folklore. Godzilla is a Japanese imagining and is just as iconic as any of the aforementioned. His design became the main monster in the Japanese kaiju genre, meaning “strange beast” (the Japanese have always loved to compartmentalise genres). Godzilla (or Gojira in Japanese) is part gigantic amphibious Tyrannosaurus Rex with Stegosaurus plates across his back and with the ability to be a fire breathing dragon. In one film he is an ungodly malevolent monster bent on willful destruction, at other times there to save man and even comical when the films began appealing to an increasingly younger audience.

Godzilla has appeared in over 30 films, segmented into four distinctly different periods: the classic Showa period (1954-1975), Heisei (1984-1995), Millennium(1999-2004) and the current period (2016-present). In addition to this the original 1954 Godzilla was re-edited in Hollywood with American actors inserted and re-titled Godzilla: King of Monsters (1956) to appeal to an American audience. There was also a Hollywood re-boot in 1998 and again in 2016 with more to follow, including one next year and Kong vs. Godzilla in 2020. The 1998 Roland Emmerich film comes under particular harsh criticism from Solomon, the book’s author, Brian Solomon.

In ‘Godzilla FAQ: All That’s Left to Know About the King of the Monsters’, Solomon brings his wealth of knowledge as a fan to this addition in the FAQ series for Applause Books. Featuring a foreword by Japanese kaiju historian, Stuart Galbraith IV, the book is a detailed breakdown of the films beginning of course with the great first film of 1954. Solomon acknowledges the predecessors to Godzilla, which of course are American: King Kong (1933) and The Beast From 20,000 Fathoms (1953), the latter of which was made using stop-motion animation by the great Ray Harryhausen while King Kong was made using the same method by Harryhausen’s mentor, Willis O’Brien. Director Ishiro Honda makes no bones about the fact that Godzilla was strongly influenced by Harryhausen and his early monster film, but nevertheless chose a different way of making his film rather than the tedious time consuming stop motion animation. He chose what became known as Suitmation – in other words a man in a rubber suit stamping over models of Tokyo or wading in water. It has to be said in the first original film this looks pretty effective and is a somewhat darker film than those that followed, especially later in the Showa period as they began targeting a younger audience.

Written as a fan, Solomon relates his own experiences growing up watching the Godzilla films and breaks the films down into their separate eras and of course goes into a good deal of detail on Honda’s first film for Toho and it’s origins with its critical twist on the US atom bombs that fell on Japan in 1945 with a nuclear bomb test awakening Godzilla from his slumber (and even includes the destruction of a Japanese fishing boat, the Lucky Dragon which did happen in 1954 during nuclear tests off Bikini Atoll). This was cut out and made less prominent in the 1956 Hollywood re-edit, although has re-emerged in the recent films (in both the American 2014 film and the 2016 Japanese, Shin Godzilla that relates events closer to the Fukushima nuclear disaster of 2011 that is the spur that awakes Zilla).

The book moves through some of the regulars who appeared in the Godzilla films from each era including actors, crew, stuntmen, writers and the stuntmen who endured the heat inside the suit. There is quite a bit of repetition in the book and at 400 pages it does feel at times as though the book is padding the book out. Otherwise, the book is set out similarly to the other FAQ books and is a substantial addition to the library and a great reference book to fans of monster or kaiju cinema.