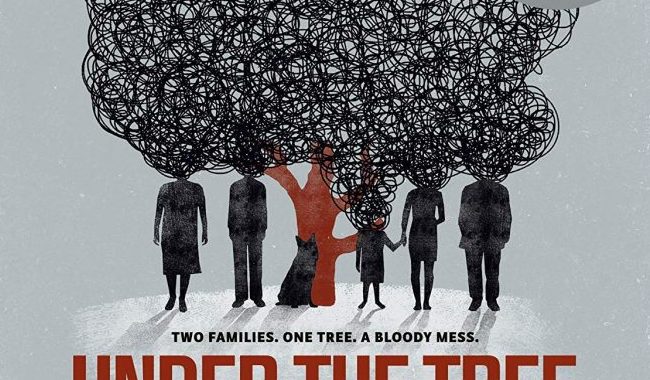 Since Baltasar Kormákur’s 101 Reykjavik (2000), Iceland has seen something of a new wave of national cinema, having made some nuanced and highly intelligent human dramas, often using some dark themes. One of the more recent films that clearly falls into this realm is relative newcomer Hafsteinn Gunnar Sigurðsson’s film, Under the Tree (Undir trénu) (2017). This film is a highly engaging family drama that, although for the most part relatively predictable, takes some dark twists and turns as it tackles dysfunctional families that extends to a dysfunctional suburbia.

As a child I recall seeing the Canadian Academy Award winning short film Neighbours (1952) which depicted similar looking suburban neighbours seated in deck chairs in front of their cardboard cutout homes. Initial friendliness escalates to all out war after they argue over who owns the right to a flower that grows in the garden in between their land. In Under the Tree the argument is initially centered around the shadow a large tree casts over one neighbours garden. But the film has two concurrent interconnected stories taking place at the start of the film. Atli (Steinþór Hróar Steinþórsson) lives with his wife and 4-year-old daughter. He gets up at night and is caught by his wife for watching porn. But more than this, his wife notices that he is watching himself and his ex-partner. She throws him out of the house and he moves in with his mother and father, Inga and Baldvin. There is dysfunction throughout this family as Inga is also bitter about the disappearance and apparent suicide of her other son.

Meanwhile, their next door neighbours, Konrad and Eybjorg are desperately trying for a baby. They have been complaining to their neighbours about the shadow their tree casts over the entirety of their garden. Their is a coolness in any interaction between them, but Inga is the most openly hostile. She starts by throwing bags of excrement allegedly from their dog trespassing. They retaliate by slashing the tyres of Baldvin’s car. And so it begins with some quite shocking results [no spoiler alert here]. As all this is taking place, Atli is fighting with his wife who is wrongly denying access to his daughter. In turn he takes her out of kindergarten for the afternoon (picnicking in front of Ikea) and gets into trouble for taking her away.

Shot by  Monika Lenczewska, it is filmed in grey tones, denying the film the sunny days seen in the discs accompanying Making Of documentary. The modern suburban homes look is straight out of Jacques Tati’s Mon Oncle (1958), as cold as the edged characters in Sigurðsson’s. Seemingly Konrad and Baldvin are the most calm and rational of the film’s protagonists but the threat of them to explode is surely never too far away. The normalcy of the all the characters makes the unfolding drama all the more shocking with each of them living their lives while another tragedy is taking place behind closed doors in private.

Another superb release by Montage Pictures, the subsidiary label of Eureka Entertainment as they continue to, in their own words, celebrating “ground-breaking and thought-provoking world cinema from new and upcoming directors.” In this they have scored with this film. It has drama, black comedy, melancholy and vengeace, none of which is delivered with broad strokes, but with subtle twists and turns that we know from early on is more than about a tree which merely acts as a cypher.