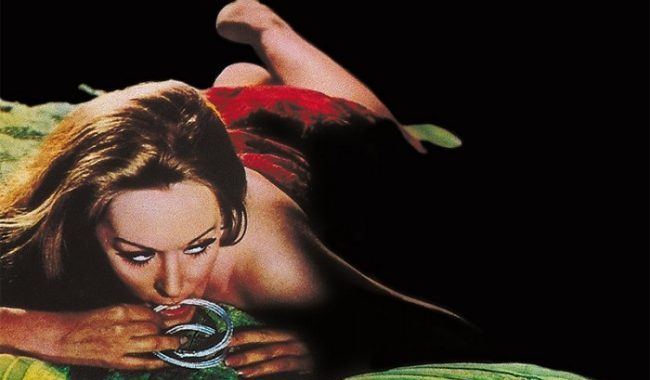 The Forbidden Photos of a Lady Above Suspicion (1970) on paper might seem a typical giallo thriller with its vibrant title, directed and co-written by Luciano Ercoli, an international cast and a kitsch score by Ennio Morricone. It was made the same year as the game changer in the genre and real giallo thriller, Dario Argento’s The Bird With the Crystal Plumage and 7 years after the first properly recognised giallo, Mario Bava’s The Girl Who Knew Too Much (1963). However, it would be disingenuous to class this film as a giallo proper.

The thrust of the story works more like an Alfred Hitchcock type of thriller, although to be honest without the Master’s touch it lacks some much needed suspense. At the centre of the story is a middle-class housewife, Minou (Czech actress, Dagmar Lassander) who soon finds herself the victim of a perverted blackmailer (Simon Andreu). He is making the claim that her husband, Peter (Pier Paolo Capponi) is a murderer who killed his late business partner. Still in love with her husband, she is convinced by a tape and recording the blackmailer has in his possession. Any money she offers is rejected an all he wants is to have some kinky sex with her. Only Minou’s best friend, Dominique (Spanish actress, Nieves Navarro) knows what she is going through. But when she begins to tell people she starts to doubt her own sanity.

There is a plentiful bunch of extras on this Arrow release, each of which are approximately 45 minutes in length. One of them, ‘The Forbidden Soundtrack of the Big Three’, a new appreciation of the music in the film by musician and soundtrack collector Lovely Jon. On this featurette, Lovely Jon explores not just Morricone’s contribution to the soundtrack, but also that of his collaborators, Edda Dell’Orso and Bruno Niccolai. It is unfortunate that it doesn’t use the music to accompany Lovely Jon’s discussion. The other two featurettes include a 2016 Q&A interview with Lassander and a featurette interviewing Ercoli and his real-life wife Navarro who appears in the film as Minou’s nymphomaniac friend, Dominique. Navarro in this film (and in the Death Walks films) went by the name of Susan Shaw.

The Forbidden Photos of a Lady Above Suspicion (another great title, one of many in Italian thrillers) is an interesting addition to those being released by such cult labels as Arrow Video, 88 Films and Shameless among others.