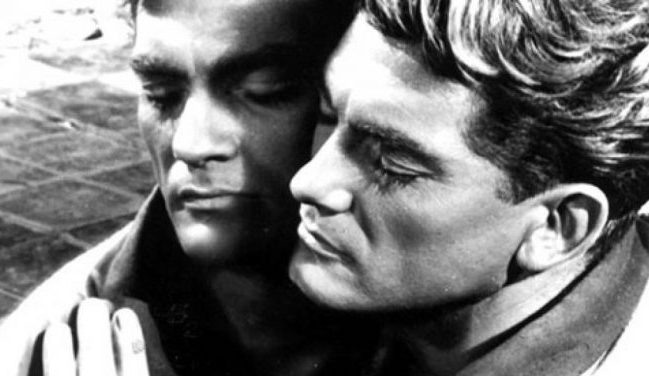 Released on BFI is a beautifully restored version of  Jean Cocteau’s Orphée (1950). Cocteau is a filmmaker who defies classification. He was a poet, graphic artist, painter, sculptor, set designer and filmmaker. Whichever medium he turned to, Cocteau would create masterpieces. This does not, however, make him a mere jack-of-all-trades or a journeyman. On the contrary, a drawing by Cocteau is undeniably and iconically a Cocteau. All of these mediums for the Frenchman were, however, a conduit for his poetry. After all he was the director who had also made La Belle et la Bête (1946) (also released by BFI). This was the second of three films in Cocteau’s Orphée trilogy; the first had been his most directly Surrealist, The Blood of a Poet (Le sang d’un poète) (1930) and three years after Orphée was the final film of the trilogy, The Testament of Orphée (1953).

The film opens with an undeniable illustration by the artist over the credits and a brief synopsis or reminder of the story of the Greek myth of the musical lyric poet Orpheus and how he followed his lover, Euryadice to the Underworld to retrieve her, paying the price that he cannot look at his lover in the face or she will disappear forever. The film then opens in a typical French café, the Café des Poètes (substituting, we presume the cafes along the Boulevard Saint-Germain, the local for the Left Bank Existentialists). Here we are introduced to the disenchanted and apparently disliked poet, Orphée (Jean Marais). Others in the café are beatniks and bohemians, the enemies of Orphée, who sees himself as an outsider (every bit how Cocteau saw himself); one of the group of people is legendary existential chanteuse, Juliette Greco in her first film performance. Marais had also been Cocteau’s former lover which adds an extra frisson to the his performance.

A short while later the scene is broken up by the arrival of a black Rolls Royce with a young avant-garde and celebrated poet, Cégeste (Edouard Dermit) falling out of the vehicle drunk. He is followed by the elegant cat like Princess (Maria Casares). A brawl ensues with Orphée fearing he’ll be blamed, but precipitated by Cégeste. Suddenly Cégeste is run over and killed by a pair of hit and run motorbikes. Orphée helps them put his dead body in the car where mysterious poetry is played in the vehicle, but instead of going to a hospital they end up at a chateau where the two motorcyclists are also waiting. Along with the body they all walk through a mirror. Orphée goes to the mirror where he falls asleep and wakes up facing a puddle and his own reflection. After meeting Princess’ chauffeur, Heurtebise (Françoise Périer), he goes home to Eurydice (Marie Déa) in an agitated state. Heurtebise falls in love with Eurydice while Orphée becomes obsessed with the mysterious Princess, who it turns out is Messenger of Death and with the death of Eurydice he follows her through the mirror into the Underworld.

Magic is the word best used to describe some of the elements Cocteau employs in the film. Of course it is not magic, but some rudimentary special-effects, yet presented by Cocteau as pure Surreal poetry and dream-like imagery. He uses negative, playback and slow motion which in Cocteau’s world becomes a different sort of reality. The Surrealist artists, writers and poets all admired and courted Cocteau, but he was always outside of the movement and certainly the political and revolutionary elements of the movement. Nevertheless, his films embrace the dream and dream imagery as much as a painting by René Magritte or Max Ernst do, but in film. The journey of Orphée being guided through the Underworld, passing ruins and being passed by glaziers is particularly effective and almost resembles a moving picture representation of a Giorgio de Chirico painting.

Orphée arguably represents the height of the director’s artistry as a filmmaker which he never really attained to the same degree again. Perfectly acted, especially by Marais and Casares, this is a beautiful to look at High Definition transfer by BFI that draws in much from Cocteau’s personal psyche, while the events and cultural impact of the Second World War and German occupation is never far away in the film (the poetry on the radio recalls De Gaulle’s calls for resistance over the radio), surprising due to criticism of the artist’s collaboration and fraternisation with the enemy by some critics. Cocteau had redeemed himself though by personally helping Jews and his own singling out for being a homosexual.

The extras on the disc are well done with a featurette on the tricks of the filmmaker, a view on the homosexuality of Cocteau by British filmmaker John Maybury, as well as an appreciation of the artist by Pierre Bergé and Dominique Marny, as well as a commentary track by Roland-François Lack. There is also a substantial booklet including interviews with Cocteau and an essay by French film expert Ginette Vincendeau.