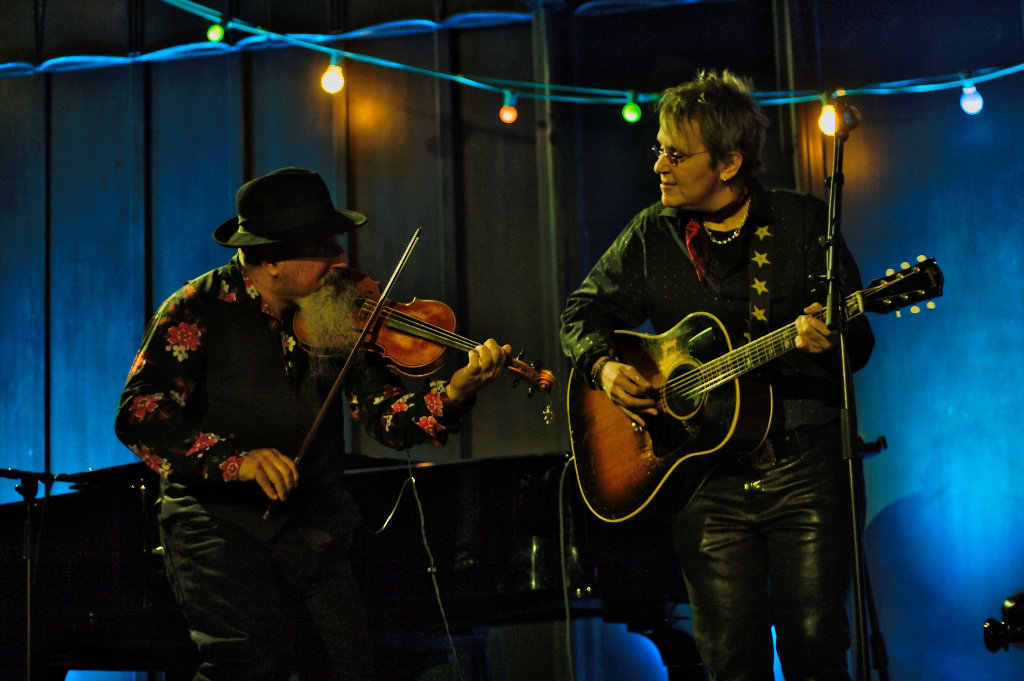 A former church now converted into a lovely musical venue was the setting for a fine night of acoustic music presented by the Celtic Connections festival. Mary Gauthier brought her southern tinged folk music to a large and appreciative audience, ably backed by young Texan songwriter Jaimee Harris. The talents of Michele Gazich on both fiddle and piano added much to the entertainment.

Jaimee Harris hails from Waco, Texas, and the raw emotion in her songwriting packs a real punch. Delivered over acoustic guitar in her strong voice, she showed why she is gaining a big reputation in Americana circles. Depressive State, introduced as a pop song about depression, and the closing Red Rescue, the title track from her recent debut album, were the highlights from a very good set.

Mary Gauthier draws many of her songs firmly in her own experiences – which include drug addiction and homelessness before eventual recovery. The excellent opener I Drink is a case in point. She described her approach to the show as starting with the addiction songs and working her way down from there.

Gauthier has a relaxed stage presence, and introduced many of her songs with humorous anecdotes, such as one about learning to box after the last American election, which eventually led to the song World Unkind, and the tale of the Last Of The Hobo Kings. The unrecorded Thank God For You was very good, with Gauthier claiming that was as close as she could get to a happy song. Another Train, a song of finding hope in hard times, was another highlight, heartfelt and emotional.

The second half of the set came from the Grammy nominated 2018 album Rifles And Rosary Beads. All of its songs were co-written with wounded veterans and their families as part of the Songwriting With Soldiers programme. Gauthier confessed to worrying if she was the right person to articulate veterans’ stories, as a “leftist lesbian” (her words) with no knowledge of the military. But she found some level of common understating through her own experiences of trauma and the resulting songs are incredibly powerful and moving.

The highlights included War After The War, the story of military wives, Bullet Holes In The Sky, telling of conflicting emotions on Veterans’ Day, and the superb Soldiering On. This harrowing song tells of the difficulty of returning to civilian life and draws from the suicide epidemic among vets.

The set ended with the hopeful Mercy Now, a call for peace. An encore followed immediately, with Gauthier ending the night by performing a fine cover of John Prine’s Speed Of The Sound Of Loneliness before leaving the stage to a standing ovation. It was a fitting finale to an excellent performance.