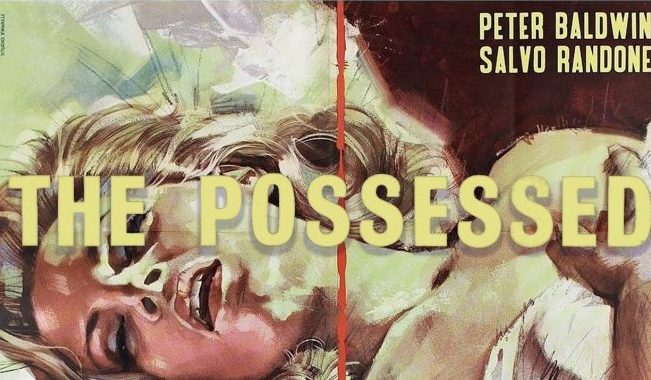 The Possessed (sometimes known as The Lady of the Lake in a direct translation of the original Italian title, La Donna del Lago) (1965), is a real find thanks to a new release by Arrow Video. It is a film that deserves broader recognition, that is neither a popular genre film or an art film in the normal understanding of art cinema. It is a proto-giallo crime film, or at least a mystery with elements of strong drama and with elements of Surrealist dreams. It also has the usual issue of post synched sound typical of Italian cinema,, posing the question whether it should be watched in English or Italian (personally I would recommend the Italian language version). It is based off a novel by Giovanni Comisso, itself based off a real life murder case.

Mario Bava’s The Girl Who Knew Too Much (1963) is usually credited as the first giallo thriller with this film made a couple of years after. It would be disingenuous to really call this a giallo, even though it shares many of the tropes of a giallo. The film opens with our main protagonist, a writer, Bernard (little known American actor Peter Baldwin, though better known in Italy) quitting a relationship and arriving in a small lakeside Alpine town. He is there in search of a long lost love, Tilde. This is a place he once came to as a tourist where he had a relationship with Tilde; the town looks mostly abandoned and somehow haunting. He starts to become obsessed in looking for the girl. He begins to see a woman by the lake and starts to see visions of people who resemble Tilde or people wearing the same coat she wore. He learns that Tilde has died, poisoned we hear, but the mystery deepens and there are suggestions that she had been murdered, adding a strong mystery element to the plot. This is where the film starts to blend the dreamlike with memory, present and fantasy, drawing the viewer in and confusing in equal measure.

The Possessed has an interesting blend of arthouse cinematography and a nerve jangling edge of your seat score by Renzo Rossellini, the younger brother of the great Roberto Rossellini and did score many of his older brother’s films. It also had two directors: Luigi Bazzoni and the nephew of Roberto Rossellini and son of Renz0 – Franco Rossellini. Bazzoni and Rossellini only made a handful of films each, their differing styles working well here. With the mixture of solid direction, music and the contrasty and beautifully lit cinematography brought out by the sharp 2K restoration from the original camera negative by Leonida Barboni, there are elements making this one of the most underrated arty thrillers containing much more to it than the usual gory or cliched aspects of the usual giallo. There is something of Ingmar Bergman’s The Silence (1963) to the film, a film about two sisters who arrive in an unnamed town on the brink of a nameless war and even has elements of mystery akin to David Lynch’s ‘Twin Peaks’.

It is a film that warrants multiple viewings, not only to get a better understanding of the plot, but to admire the imagery too. The small part of Tilde is played in flashback sequences and in photographs by the beautiful Virna Lisi, probably the biggest name star in the film, but her image permeates the film. Another co-star is Valentina Cortese an actress of international films and who had previously starred in Bava’s The Girl Who Knew Too Much. As is now expected with Arrow Video the released, it is filled with extras including a commentary track by Tim Lucas and a discussion and appreciation of the film by Richard Dyer. Other extras include an interviews with the film’sassistant art director Dante Ferretti, with the film’s makeup artist Giannetto De Rossi among others. A film worth discovering.