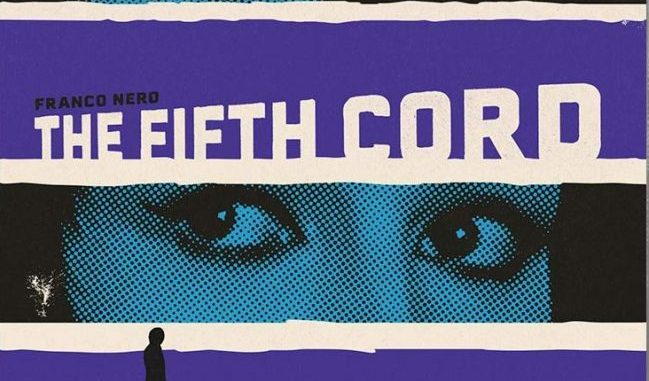 Arrow Video have released two films by Luigi Bazzoni concurrently, the first being the earlier The Possessed (1965) (also reviewed on Glasswerk). Bazzoni is an interesting director who only made 5 feature films and all are what could be called genre films: 2 giallo, one Euro Western, a gangster films and a bizarre quasi giallo-sci-fi film. It is unfortunate he didn’t make more films, as his films clearly had an arty look to them. The Fifth Cord (1971) is rather bare facedly influenced by the previous year’s The Bird With the Crystal Plumage by Dario Argento. It contains all the tropes one would expect from a giallo: a black gloved killer, fish-eyed lens P.O.V. shots, a distorted recording of the killer’s voice, music by Ennio Morricone, sexual deviancy and even its urban locations.

The film opens (similar to The Bird With the Crystal Plumage) with the voice of the killer as he moves through a New Year’s Eve party (shot with a fish-eyed lens P.O.V. shot) with the protagonist moving through the party. He says he will be killing five people in the New Year. The subsequent action takes place over the next 6 months. The first victim is an Australian, John Lubbock (Maurizio Bonuglia) who is attacked but survives. The next victim, about a month later is the sick and sad wife (Rosella Falk) of a businessman who is thrown down a staircase. The police are investigating led by a detective (Wolfgang Preiss) who believes there is a connection with an investigating journalist, Andrea Bild (Franco Nero) who is also investigating. Bild is a barely functioning alcoholic, replete with raincoat and unshaven seems to mirror the typical American hardboiled private eye type from film noir.

The plot moves forward with more murders with Bild continuing to investigate. The rather standard giallo film is lifted by some extraordinary locations, framing and production design from the modernist buildings and architecture, the odd shots of wasteland, modern houses and furniture as well as stylish modern women and young men. The film was shot in the modernist cityscape of south Rome, Quattiere XX Ardeatino and the nearby park in Tenuta ti Tormaracia. The framing of each shot, architectural reflections in glass, the straight lines across faces is worth watching in its own right. To some degree this does disguise the standard, unspectacular dialogue of the film (again, better seen in the original Italian).

Despite this, the film is very enjoyable and will have its fans. Nero is, well Nero, with his steely blue eyes and macho look, while the female cast of Pamela Tiffin and Silvia Monti look very beautiful in their late 60s, early 70s look and style, given them added beauty with the 2K restoration. And of course not forgetting the Ennio Morricone soundtrack typically blending the kitsch and the atmospheric nerve jangling score as he did with other giallo including the early Argento giallo classics The Bird With the Crystal Plumage and Cat O’ Nine Tails (1971). The extras on the Arrow disc are plentiful and worth viewing, including an engaging visual essay by Rachel Nesbit, although sometimes she talks too fast making it hard to keep up and a thorough evaluation of the film by Michael Mackenzie, an interview with Nero and a commentary by Travis Crawford among other things. Enjoy the style.