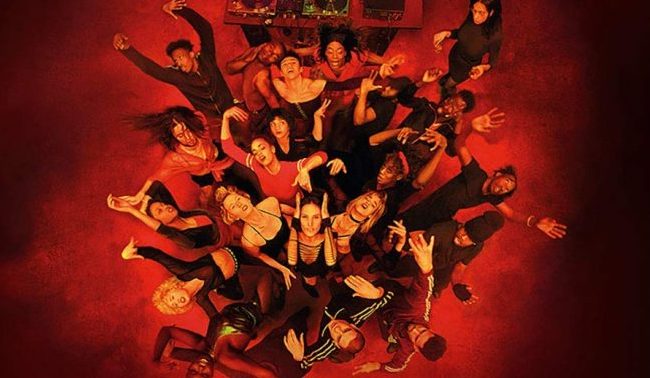 Argentinian born French director Gaspar Noé caused controversy with his second feature, Irreversible (2002), a film that tells the story of a woman who one night is raped in an underpass while the rest of the film recounts the events in her life that led to the rape. His first film, the brutal Seul contre tous (I Stand Alone) (1998) was also shocking. This has left some critics to reduce his films to that of a deliberate provocateur intending to shock. His latest film, Climax (2018), released on Arrow Video also has a shock value to it.

The scenario of Climax is set over one night in an abandoned school in which a group of dancers rehearse and party. The first half of the film contains has an impressive and beautifully shot dance sequence in which each of the performers showcase their talents as dancers and movers played to a remix of Cerrone’s classic disco track, ‘Supernature’. For the open of the film we see a small portable TV surrounded by books, DVDs and VHS tapes. On video talking heads pieces we are introduced to the dancers who explain what dance means to them in their lives. Surrounding the TV are references on the aforementioned discs and books that both mean something to Noé and played some influence in Climax: Bunuel and Dali’s Un Chien Andalou (1928), David Lynch’s Eraserhead (1976), Zulowski’s Possession (1981), Kabel’s Angst (1983), Argento’s Suspiria (1977) and Pasolini’s Salo: 120 Days of Sodom (1973) among others. Apart from an opening aerial shot of a bloody woman rolling in the snow, we move to the abandoned school, boldly shot in shadows and reds and greens. Music is important to the film with the camera dizzyingly moving around in trademark Noé style. After the dance sequence we learn that the party has been organised by a former dancer, Emmanuelle (Claude Gajan Maull) who has also invited her 6-year-old son, Tito to the party before settling him down to sleep. We then hear the conversations between each of the people at the party, some know each other, others don’t. The spectacle of the dance is choreographed like an extreme musical, or as Alexandra Heller-Nicholas says on an extra featurette essay on Noé’s career on the disc, it is like a re-imagining of Bob Fosse’s All That Jazz (1979). But through the conversations between the participants we hear graphic sexualised and misogynistic dialogue between two black men, relationship talk, gossip and fall outs. Halfway through, some very loud and bold credits then appear, marking the point that the film changes tone. The sangria that Emmanuelle has made seems to have been laced with LSD as the dancers all start to behave strangely, feel hot and their behaviour becomes erratic. Realising that the drink has been spiked, the reactions explode into paranoia, violence, emotion and unpredictable behaviour that leads to a relentless 45 minutes of jaw dropping disbelief and horror as they all turn each other in an almost unbelievable orgy of sex and violence (referencing Pasolini’s Salo).

Noé’s films have a frenetic energy to them; this one is very much a dance film that turns into an orgy of violence. On an extra interview with Noé on the disc, he was surprised that this was one film that was not so widely banned and was to receive an R rating, what he, probably correctly put down to the fact it doesn’t have shots of genitalia, but the censors seem to be okay with a child’s death, drugs and excessive violence. Equally distinctive is the mad movements of the camera, a trope in Noé’s films, that seems to make what’s going on all the more crazy and confusing. On another extra on the disc, a short film by Noé called Shoot (2018) the P.O.V. is from the perspective of a football being kicked around. Elsewhere, the vertical view looking down on the dancers works aesthetically very well, with the dance sequences of course the most beautiful aspect of the film.

Noé’s films are challenging and not for all tastes, in fact probably only for the few. It is, as with nearly all his films, very shocking but will still keep anyone willing to stick with it engrossed. Arrow have done the release proud with the contextualising extras including short films by the director which have always worked alongside his features, indeed his features seem like extended short films. There are also featurettes on the music used in the film by Alan Jones, author of the books ‘Discomania’ and ‘Saturday Night Fever: The Story of Disco’, an interview with Noé, who also provides a commentary track and a featurette on the dance sequences which include interviews with Kiddy Smile who appears in the film as Daddy, the D.J., himself a well known D.J. in France. Prepare to dance and be shocked, a very unusual marriage indeed.