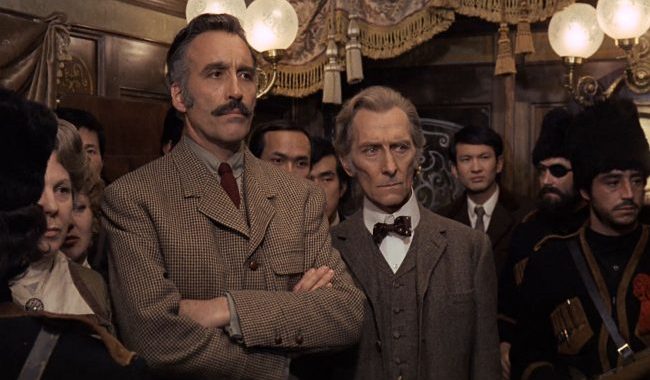 Horror Express (1972), granted a poor title (it’s Spanish title Panico en el Transiberiano), is a very special horror movie from the 1970s indeed. It offers the best of euro horror and with the added bonus of classic British horror stars Christopher Lee and Peter Cushing, giving that classy British horror look with its turn of the century setting. What is even more surprising that the budget for this film was made for a mere $350,000. True, the locations for the film are limited, but look great.

The film opens with Professor Sir Alexander Saxton (Lee) and his sherpers who discover the Missing Link from millions of years ago preserved in the ice in Szechuan Province. He has it crated up and loaded onto the TranSiberian Express in Peking (but filmed at a former Madrid railway station). A curious thief regrets looking into the crate of prehistoric goodies when his eyes suddenly start bleeding, turn white and he dies. Meanwhile, Saxton bumps into an old British chum, Dr. Wells (Cushing) who is boarding the same train. The film switches to a sort of horror version of Agatha’s Christie’s Orient Express as first the baggage car handler and then other passengers on the train begin to die, all in similar circumstances with bleeding eyes and blank white eyes.

After a series of murders,  Messrs. Saxton and Wells try to investigate when it becomes apparent that the mysterious thing in the crate is responsible. But that is not the whole picture. It transpires that although the Missing Link is the killer, it has been brought to life by an entity from outer space that has taken over the body as a host and when it kills, the eyes light up red and wipes the brain of its victim. Carrying out an autopsy, Wells notices that the brain is, as one of the onlooker’s says, “as smooth as a baby’s bottom”. This entity from outer space seems to be taking the memories of it’s victims and when they also look at eye fluid through a microscope they also able to see the last thing the victim sees. There is a crazy premise to the film that sounds silly, but somehow works.

Before the film starts to get too boring with a rising body count, enter Telly Savalas as a Cossack Captain, who bombastically enters the train as a vulgar and coarse Cossack. This breaks the film up very well and breaks any sense of monotony that it might be entering. He is not in the film for long, but never the less adds a certain extra dimension and brings some great charisma to the film.

Over the years Horror Express has grown into a cult picture as a euro horror and is a good one. Lee and Cushing add class to the film as they always do, as they always did. The film looks so much better on this High Definition release on Arrow Video than it did on previous releases (the Severin version which came out some 3-4 years ago was also good) which suffered the indignity of being in public domain releases. It does have the negative effect of showing the train up as a serviceable, but maybe more obvious model. The model train is still very good though and was a hand-me-down from director Eugenio Martin’s previous film, the Western, Pancho Villa (1972) (also starring Savalas) and utilised it to good affect here with the very detailed model of the train. The overall production design is very good and has that Edwardian style so common in many British horror films.

The extras on the disc are also plentiful and give some good and, it has to be said affectionate appreciation of the film. That is, other than the introduction by fan Chris Alexander that seems a little pointless. There is also an interview with Eugenio Martin, a director who is now in his 90s, but still very lucid and brings his point of view on the making of the film. There is also a featurette on the film’s producer, Bernard Gordon who had been a Hollywood writer before being blacklisted in the early 1950s and an interesting featurette on the film’s music composer, John Cacavas who was a good friend of Savalas’ and talks about he came into being a composer on this film and others and how Savalas grew his career. Overall the film is classic good fun 1970s horror film in all it’s tropes and one worth re-visiting again and again.