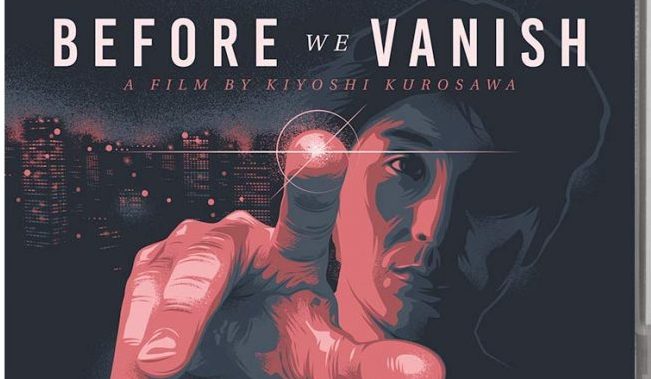 Kiyoshi Kurosawa’s career trajectory has demonstrated that he is arguably one of the best genre filmmakers working in Japan today. Although by no means all his films are horror or fantasy, he has certainly explored these themes in a growing body of interesting films.  While not his first genre film, the first one that given a great deal of domestic and international attention was Cure (1997), a film about a detective investigating a series of murders carried out by a supposed serial killer but are acted out by apparently normal people who do not recollect what they have done. He also ventured into the popular Millennial J-Horror boom with Pulse (2001) and Revenge (2006), the genteel ghost story, Journey to the Shore (2015) and more recently the suburban serial killer film, Creepy (2016).

Kurosawa’s latest release in the UK, Before We Vanish (2017) continues the trend, this time with a more science-fiction story. In fact there is almost an Invasion of the Body Snatchers kind of plotline to the film. It opens with a sequence with a woman screaming and being dragged back into her house. The next shots are of the domestic interior turned upside down with corpses of the occupants. A blood drenched schoolgirl walks down the road with a wry smile on her face while vehicles crash around her. The film calms down a little after this when we are introduced to the three protagonists, each of them a little odd and each making the claim that they are aliens from another planet, including a man whose wife was becoming upset at his changed behaviour. They spend time discussing their host bodies and as the film develops try to understand human behaviours which more often than not leaves them perplexed in advance of the alien invasion.

The film changes pace and jumps around somewhat more than Kurosawa’s previous films, lacking the subtlety of say Tokyo Sonata (2008) or Creepy, as it constantly tries to draw itself back within the frame of the genre guidelines (Japanese cinema, particularly before the 1980s was very coded towards the genre of any given film). At one moment it is witty, at another very violent and in the next scene a pastiche on science-fiction, jumping around so much that it is at times difficult to gauge the tone of the film. Before the climax to the film we are launched into a more apocalyptic view of how the alien invasion is going to be played out with greying skies and explosion taking place around our protagonists. The special-effects are at times also a little wanting. Nevertheless, it is an interesting take on familiar science-fiction tropes.

Given this is an Arrow Video release, there are some extras including an on set Making Of documentary containing interviews with cast and crew and some red carpet and festival events for the film’s screening, none of which, other than an interview with Kurosawa give too much of an in-depth look at the film.