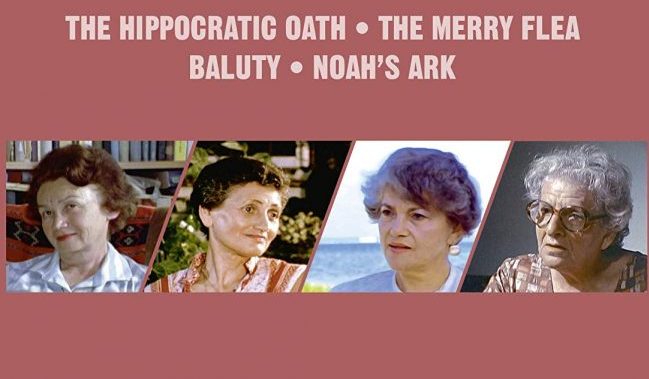 It cannot be overstated how important the testimonial films of Claude Lanzmann are. His most celebrated documentary was his second film, the 550 minute film Shoah (1985), re-released by Eureka! in 2015. In 1999, Lanzmann made a group of four similar films after Shoah, what the press release by Eureka correctly called satellite films, recognising that Shoah was a lifetime’s work. Sadly Lanzmann passed away last year and The Four Sisters is the last of Lanzmann’s legacy films released by Eureka! in their Masters of Cinema series. A collection of four interviews with female Holocaust survivors who are connected by their own unique stories, yet separate experiences of the Holocaust, all originally filmed and intended for Shoah. Each of these women, hailing from different corners of Eastern Europe give their own different, yet somehow similar stories of survival amidst unbelievable horror.

The format is very similar to Shoah (these testimonials were filmed in the late 1970s and early 1980s to be included but never shown in Shoah) in that the camera lingers on their faces, trying to capture the expression on their faces as they reflect on what they experienced and witnessed, allowing their words and stories to speak for themselves without relying on any footage and only a few grainy photos of the Łódź ghetto for one of the stories. The first testimonial, ‘The Hippocratic Oath’ (93 minutes) is arguably the hardest to sit through. It focuses on Ruth Elias, the Czech daughter of a non-kosha sausage factory owner who’s family hide out on a farm without revealing they are Jews, until they are exposed and arrested. The whole family are sent to the Theresienstadt Ghetto outside of Prague. There, Ruth is separated from her family and takes comfort that her fiancée is a prisoner in the ghetto. Some time later, the rest of her family are deported east (to Treblinka we learn) where they were all exterminated in the gas chambers. She learns to rely on instinct and once married in Terezin she soon falls pregnant making her life even more perilous. Sent to Auschwitz with her husband she ends up in the Familienlager where she continues to hide her pregnancy until selected by Dr. Mengele for rubble clearance in Hamburg. Once her pregnancy is exposed her story turns deeper into horrific tragedy.

The next testimonial, ‘The Merry Flea’, follows the unbelievable story of Ada Lichtman who witnesses the horror in the immediate aftermath as the Nazis invaded Poland in September 1939 and witnesses the roundups and slaughter of men and boys in the small town she hailed from. This reflects stories told repeatedly throughout Poland and the occupied East in which villages with Jews were cleared in this way. She tells numerous tales about how the German occupiers mocked their captives, humiliating and dehumanising them further. Eventually she is deported to Sobibór extermination camp. Ada was one of just under 70 people who survived Sobibór, out of approximately 350,000 who were murdered there, most of whom were Jews and Russian prisoners, making her testimonial a very important witness of this extermination camp (although not mentioned in the documentary, she was also a witness of the Eichmann trial).

This is followed by the story of Paula Biren, a very elegant lady who witnessed events and life in the Łódź ghetto, talks with great detail and humility as she is probed by Lanzmann about life in the ghetto from hunger, work, the Social Darwinism of the camp, luck and survival. She also talks at length about how the Łódź ghetto was run as a Jewish state within the city ruled by Chaim Rumkowski with his feared Jewish police, until the ghetto was eventually cleared and those who remained, including Rumkowski were sent to the Death Camps. She was sent to Auschwitz with other members of her family and, like the other women who speak in this documentary, she is the only survivor of their immediate family.

The final testimonial is ‘Noah’s Ark’, the unbelievable story of an exclusive group of Jews from Hungary who have a controversial story as they were considered privileged Jews. Hanna Marton speaks about how Rudolf Kastner, the Zionist leader of the Aide and Rescue Committee who negotiated in 1943 with Adolf Eichmann about saving a train of Jews and sending them to safety to Palestine via Switzerland, while their Jewish friends and kin are gassed in the Death Camps. Kastner negotiated with the SS leadership and allowed these survivors from Cluj in Hungary to leave as they were perilously moved around from Europe including from Bergen-Belsen before their final journey. This is a very personal story for Hanna Marton as Kastner was her father-in-law and, like Benjamin Murmelstein, the Judenrat leader of the Theresienstadt Ghetto who Lanzmann interviewed for The Last of the Unjust faced criticism for collaboration for trying to save his people, eventually leading to his murder in Israel in 1957.

Claude Lanzmann was born in France in 1925 and as a Jew fought in the French Resistance before getting to know the Existentialists in the 1950s and 60s including Jean-Paul Sartre. All of his films address Jewish identity, but for the most part act as satellites to his central film, Shoah. No documentaries dealing with the Shoah or Holocaust are as powerful as these interviews; again it should be noted that there is no footage with the power lying in the expressions on their faces or the testimony they give. As such, these are historical documents. Occasionally each one of these ‘sisters’ allow their guard to drop and we see a tear appear without ever breaking down and each one of them are able to tell their stories with great control. I have met many survivors and each time as a listener each story is so incredible you begin to doubt what you are hearing. These stories are beyond powerful and act as a remarkable record of witnesses to history.