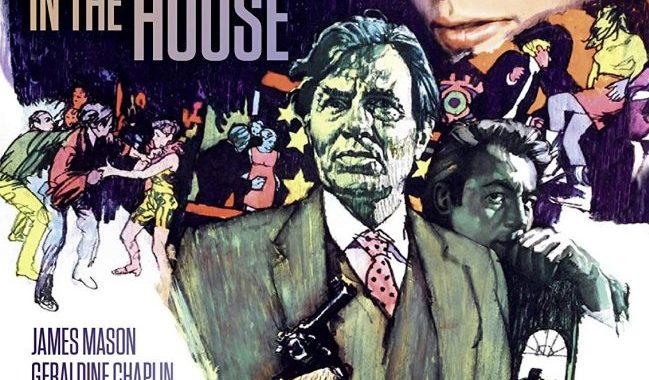 As with previous releases by BFI in their Flipside series, Stranger in the House (1967) is a rare little seen film that has barely had an audience since its original release, surprising given the star pulling power: James Mason, Geraldine Chaplin and Bobby Darin, as well as an early performance from 1970s UK TV heartthrob Ian Ogilvy. This is the 37th Flipside release and like other recent Flipside releases it has a nicely illustrated cover art taken from the original poster. Interestingly, location shooting is in Winchester and Southampton, as well as the Solent; it also has a quirky storyline that focuses on a father-daughter relationship.

Written and directed by Pierre Rouve, this was Rouve’s only directorial effort, although he did also write the script to Mr. Topaze (1961) starring Peter Sellers and also soon to be released by BFI. Stranger in the House was adapted from a novel by prolific Belgian writer and creator of ‘Maigret’, George Simenon. At its core is the fractured and damaged relationship between an alcoholic former barrister, John Sawyer (Mason) who has a very difficult relationship with his teenage daughter, Angela (Chaplin). He has turned to the bottle since his wife left him a few years before and fantasies about the bitter and acrimonious way she left him in their large rundown Winchester house. Angela spends time hanging around with her groovy mates and clubbing in Southampton. One of the friends is an American runaway called Barney (Bobby Darin) and between them and their other friends they break into a moored ship in the port on the Solent. There they meet a Cypriot on the ship, Jo (Paul Bertoya). Following a fight between the friends, Angela hides Barney in the attic of her house, but following a break-in he is found murdered and Jo in probable xenophobia or racism is the chief suspect. Reluctantly Sawyer takes on the case to defend Jo, supported by Angela and so the road to reconciliation between father and daughter commences.

The original book by Simenon was written in 1940, ‘Les inconnus dans la maison’ (directly translated into the film title). It had been made into a French film in 1942 and was remade as a low budget film in 1997. The 1967 film does feel a little quirky and dated to be relevant today. Nevertheless, it does work well as a period piece and as a film of its time. The opening shot is in a club, played to a track by Eric Burdon and The Animals with a psychedelic party and the scenes where the friends are goofing off tries to emulate the playfulness of such films as The Knack (1965) but looks naff. In some aspects it does seem to have a few elements that resemble The Knack, but lacks much of the humour of the earlier film. The cast is strong though, Chaplin looks elfin-like and the film contains a strong performance from Mason with his usual consistency as an actor. Another actor in the film in an early role is Ian Ogilvy who in the 60s would perhaps be best known for co-starring in all the films of tragic young wunderkind director Michael Reeves, appearing in the trio of classic horror films he made: She Beast (1966), The Sorcerers and Witchfinder General (both 1967). Ogilvy would later go on to star in the re-boot of the ‘The Saint’ TV series.

Unfortunately, there are very few contextual extras on the disc with the usual peripheral archive extras, including a 1900 piece of film of a tram moving through Southampton, a documentary (1964) about the docks in Southampton, a psychedelic coffee advert (!) and an audio only 1981 NFT interview with Mason. There is a commentary track too, but the real highlight is the short film, G.G. Passion, an avant-garde odd film made by photographer David Bailey and starring a young models Caroline Munro and Chrissie Shrimpton.