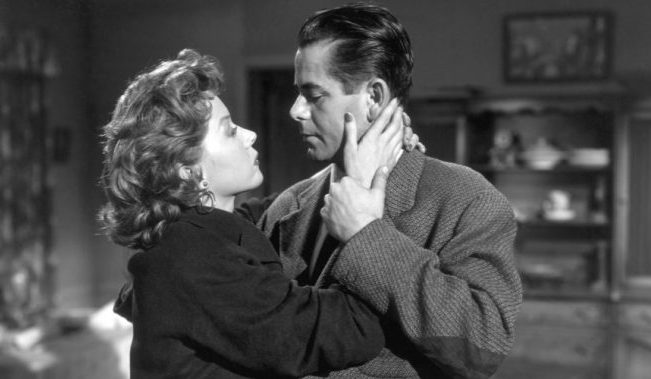 Fritz Lang followed up his classic hardboiled film noir The Big Heat (1953) with Human Desire (1954), his all-American blue collar apparent adaptation of Emile Zola’s 1890 novel, ‘La Bête humaine’. Previously filmed in France by Jean Renoir in 1938, the film is closer to Renoir’s film than Zola’s novel. He also reunites two of his cast members from The Big Heat, Glenn Ford and Gloria Grahame. The story is updated to contemporary America and, like Zola’s novel and Renoir’s film, the story is set around railway yards. The film opens as it ends with some long shots of a train journeying along the tracks. Hollywood has followed the importance of the railroad connecting America and Americans from such Westerns as Union Pacific (1939) and Denver and Rio Grande (1952) to thrillers such as Strangers on a Train (1951) or modern comedies such as Silver Streak (1977), not that you would know there was much of a railroad in today’s America.

Aboard a train in the opening scene is Jeff Warren (Ford), a returning soldier from the Korean War who has come back home to take back his old job working for the railroad company as a brakesman engineer. If Ford emanates a big smile playing on the trains, it’s possibly to do with the fact that his father in real life was employed as a railroad engineer. He is riding in the carriage with his old friend Alec (Edgar Buchanan) and is going back to live with him and his family. Alec’s daughter (Kathleen Chase) is now all growed up and is still sweet on Jeff. Also working for the railroad company is Carl Buckley (Crawford), a rather course, gruff and heavy drinking individual who has just learnt that he has been dismissed for his bad attitude. Buckley has a young sexy siren of a wife, Vicki (Grahame). He pushes Vicki into getting in touch with a man she used to knock around with who happens to be a top dog in the railroad company. They travel by train to the city together, where she visits him at his office. She is gone for some hours, leaving Buckley brooding in his hotel. With some justification, he accuses Vicki of using her sex to get him his job back to which he violently reacts.

Buckley forces Vicki to lead him to the man and the couple board the train the boss travels on. Travelling on the night train they arrive at the man’s private sleeping car, enter when he stabs the man to death. Outside, in the corridor is Jeff, travelling on a journey back home. Buckley sends Vicki to distract him which she duly does and Jeff flirts with her. Buckley and Vicki have now lured the innocent Jeff into their dangerous web of deceit, murder and lies with Buckley holding blackmail and violence over Vicki.

Lang’s film is suitably bleak, although less so than Renoir’s film, or Zola’s novel. Human Desire is now released on the Eureka Entertainment Masters of Cinema label, although the one extra on the disc is a talk on the film by Tony Rayns who throws his attention to Alfred Haynes, the film’s writer. It is not a film widely recognised as being up their with Lang’s best and indeed it is relatively routine, but nevertheless has grown in stature over the years and has a suitable seediness that possibly goes someway to explain why it was critically claimed in France. The great machines of the train engines are also well presented (mastering the machine as the director had done with his silent masterpiece, Metropolis, 1926 and also released by Eureka).