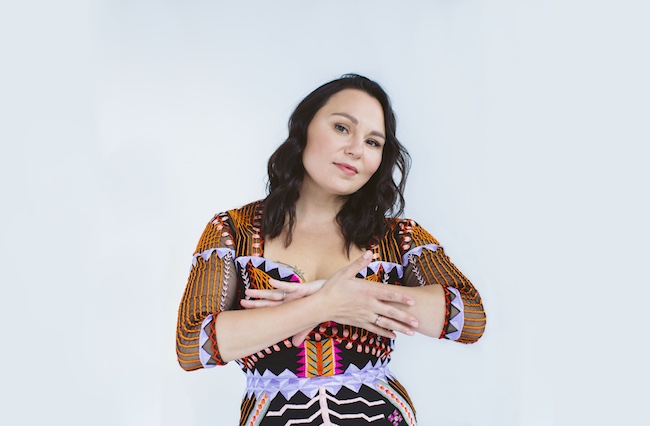 Experimental Inuk artist Tanya Tagaq has shared the title track from her upcoming digital EP ‘Toothsayer’, out this coming Friday, March 1st, 2019 via Six Shooter Records. Following the release, Tanya will be performing at The Borderline, London on 27th March.

UK experimental electronic artist Ash Koosha, who met Tagaq for the first time when the artists were invited to work together for a BBC Late Junction session in 2017, also performs on “Snowblind” and “Submerged.”

“I named this Toothsayer because I always liked the term soothsayer, to look into the future and to speak wisely,” says Tagaq of the title. “Teeth represent protection and hunting in nature. We are going to have to get our fists up and our teeth out to carve our way to survival in this world.”

Organized as a categorical assessment of the different and extreme elements of the Nunavut winter, where “it’s so easy to succumb to death in the north purely by the elements, including the socio and political elements,” (cue the closing track, “Hypothermia”), the EP also connects in title and theme with ‘Split Tooth’, Tagaq’s debut novel.

The book, a powerfully permeative mythobiography about a girl growing up in Nunavut in the 1970s, was released in September 2018 and immediately found a place on the Giller Prize Long List, Canada’s top fiction prize. The work also appeared on year end Best Of lists including NPR, Globe and Mail, CBC, Toronto Star and more. Apple Music named the work Canada’s Best Canadian Audiobook; narrated by Tagaq with improvised vocal elements, Split Tooth’s fact-fiction-dreamscapes come alive in this spoken word form, which moves between silky hypnotic poetry and carotid-ripping song. Toothsayer travels a similar path to Split Tooth through poles of exquisite delicacy, frenzy and fury. More about ‘Split Tooth’ here.