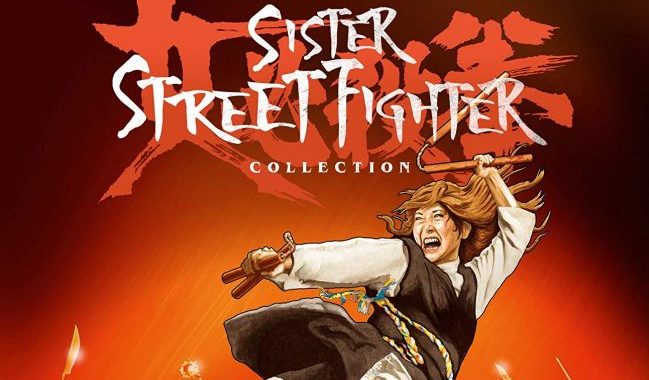 There is something of the Western Blaxploitation feel to the Sister Street Fighter films with the funky soundtrack, criminal and drug smuggling back story and revenge. The collection consist of four films that were made alongside the male hero contemporary films, The Street Fighter series(not to be confused with the 1990s films starring Jean-Claude Van Damme which also kicked off (excuse the pun) the same year). Each of the Sister films starred Etsuko Shioshi as Li Koryu, although the final one, Sister Street Fighter: Fifth Level Fist (1976) is a stand alone and part of the series in name only.

The first film, Sister Street Fighter (1974) stars Shioshi and Shin’ichi ‘Sonny’ Chiba, star of The Street Fighter, making this film very much a crossover, as both had starred in the aforementioned film. Sister Street Fighter commences the same as the next two films, with an incident involving Koryu in Hong Kong, a drugs incident involving Koryu and a family member or close friend. The drugs operation also connects with Yokohama in Japan where the rest of the action moves to. For one reason or another Koryu seeks revenge, either with a partner or alone and in the first film, it is with action star Chiba. Going beyond these establishing scenes, each film becomes pretty much none stop action as the character of Koryu with one male co-star or another kicks, fights and karates her way through the action. This is one of the problems of the films in that there is pretty much just none stop action with little space for much in the way of character development. What each of these actions do present however are the multi, often amusing villains who are thrown Koryu’s way with titles telling us which martial arts speciality each protagonist has.

The viewers themselves can witness how Shiosi herself develops as an actress and by the final one, the film with the least connection between the others, Sister Street Fighter: Fifth Level Fist has Shiosi playing a different character and has little in either style or anything else other than it’s Yokohama location in common. Unlike the previous three films, this one was directed by Shigehero Ozawa (the director of the original The Street Fighter films) and instead focuses on a film studio that acts as a cover for a drugs operation. This time Shioshi plays Kiku Nakakawa, the daughter of a nagged kimono shop owner. Her best friend, Mitchi (Mitchi Love) is dating an African American, Jim Sullivan (Ken Wallace) who is involved with the drug smugglers and is eventually killed in a shootout. Kiku goes after the gang.

Still sporting the same funky soundtrack and an exploitation look and feel, this one particularly breaks away from the other, more typical genre martial arts film; this one looking very much like a Pam Grier vehicle. The action has all the usual exaggerated foley sound, but for the most in all the films the action ranges from being well choreographed to the ridiculously funny, such as the air flying fights against the big boss in Sister Street Fighter: Hanging by a Thread (1974) in which the wires can be seen. The director of the first three films was Kazuhiko Yamaguchi who felt that Shioshi was the most adept at the use of nunchucks and there is plenty of showmanship from all concerned with this particular martial-arts weapon in the Okinawan kobudu blend of karate played out well with Shioshi. Whichever, it is clear there is a feminine and fighting grace from the actress, best seen with the nunchck works in the mirrors played to Shunsuke Kikuchi’s funky score during the opening titles of the first three films.

Once again Arrow Video have done themselves proud in bringing a series of films together in one set. It would be great to see these films paired up against Sonny Chiba’s turn in The Street Fighter films. There are three main short featurettes on the film that once again includes an interview with Chiba. In addition there are interviews with Yamaguchi, and screenwriter Masahiro Kakefuda.