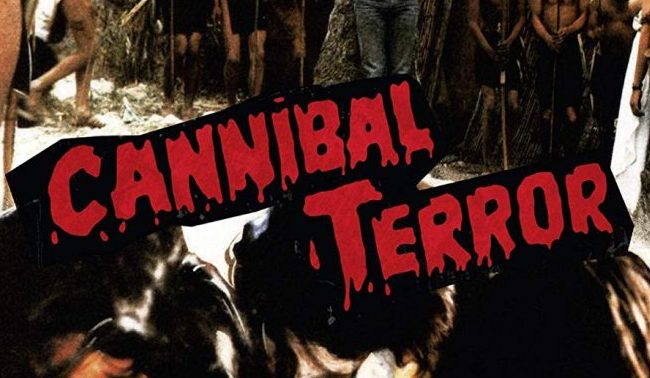 If Italian cannibal films, all the rage for the VHS sleaze crowd in the late 1970s and 80s, were low budget gore fests with poor acting, poor dubbing and more than questionable animal cruelty that led to them raising questions among moral guardians that these were snuff films, then their Spanish counterparts were an even lower drop in standards. What Cannibal Terror (1980) offered was that in 1983 it joined the dubious ranks of the so-called “video nasties”. It did seem that rather than viewing the films, the powers that be looked at the title and overall theme of the films and rubber stamped them as a “video nasty” and unwittingly gave them a kudos for those seeking out the nastiest and most controversial of horror films.

That is not the case with this film, as the reputation of the film somewhat precedes it, although there are of course some scenes of cannibalism as well as a scene of sexual violence. Once thought to have been directed by the king of Spanish exploitation cinema, Jess Franco, it was actually directed by French sleaze filmmaker, Alain Dereulle who in this film went under the name A.W. Steeve. Unlike the contemporary films made in Italy by the likes of Umberto Lenzi, Ruggero Deodato or Sergio Martino, who all shot at real tropical locations such as Venezuela or Sri Lanka, these Franco-Spanish films were shot in Spain pretending without much conviction to be in tropical locations and instead of using real natives they are quite obviously modern white men barely disguised as natives with their Western hairstyles and hardly concealing their laughing at the preposterous dancing or gobbledygook they are speaking.

The plot, for what it’s worth has a big-wig whose small daughter is kidnapped by a gang of criminals. We learn their hideout is on the edge of an area known to be near a local tribe of cannibals. Naturally an unsuspecting woman stumbles upon the cannibals, is taken to their camp and after a brief ceremony her guts are eaten by the tribe (of mostly males it would seem). The plot offers a great deal of dullness for the most part until the finale when the mother of the kidnapped child turns up with others and chase the gang and the child through the jungle (with repetitive digetic parrot and jungle sounds). Inevitably the bad guys all get their just deserts at the hands of the cannibals (well the cannibals get their deserts at any rate).

The acting is dreadful throughout with zero redeeming qualities while the ‘cannibals’ are worth watching for a laugh. It does serve the function of making the Italian cannibal films look like classics, but on the other hand is less nasty than it’s Italian counterparts. It was made the same year as the height of these sub-genre films and the year that it exploded. Although not the first, Mountain of the Cannibal God (1978) had something interesting about it. It was directed by Martino, a filmmaker whose films were full of adventure. The same year as Cannibal Terror was made, there was also the most notorious of them all, Cannibal Holocaust, as well as Eaten Alive!, Devil Hunter (this one was directed by Franco), Zombie Holocaust, Cannibal Apocalypse and the other well known Spanish cannibal film, White Cannibal Queen.

There is a fantastic supporting documentary on the disc with horror experts Calum Waddell, Alan Bryce among others and is appropriately titled, ‘That’s Not The Amazon! – The Strange Story of the Eurocine Cannibal Film Cycle’ giving some superb context to this genuine piece of Euro trash. The image is also sharp, rather than the poor quality VHS tapes available in the 1980s.