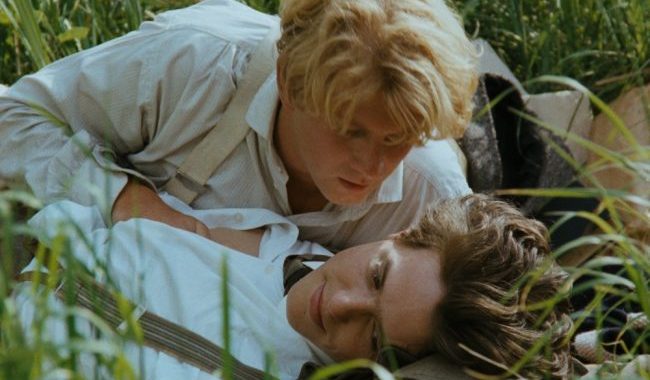 The partnership of director James Ivory and producer Ismael Merchant made and adapted three films by novelist E.M. Forster in a relatively short period of time. The first was the huge critical and box-office success A Room With a View (1985) that assuredly put British cinema on the map as a leader in Heritage Cinema. The third film was also a big success, Howard’s End (1992) which co-starred some of the same cast members from A Room With a View. In the middle was Maurice (1987), an unpublished novel by Forster dating from 1914. Based off a true story relayed to the author by a friend, it was alleged that the author was not satisfied with it, but the over-arching concern was it’s homosexual subject which would most certainly have led to a huge scandal and put an end to Forster’s career as a published writer. Indeed, the novel was not published until 1971, 4 years after homosexuality was legalised in the UK.

Like all Merchant-Ivory productions since the 1970s, Maurice has a sumptuous expensive look to it, but was made on a low budget with a look of being expensive. It once again makes good use of the English locations including Cambridge, Wiltshire, the British Museum, Bloomsbury and elsewhere in London. It opens on a wind swept beach and Simon Callow in a usual lovey performance as a teacher explaining the facts of life to the boy by drawing sexual anatomy in the sand until a mortified family walk by. The boy is Maurice Hall, the main protagonist of the story. Years later, in 1909 Maurice (James Wilby) is at Cambridge University where he befriends Lord Risley (Mark Tandy) and Clive Durham (Hugh Grant). It doesn’t take long before Maurice is attracted to Durham and the two begin an affair and declare their love for each other. Of course homosexuality was illegal and the pair risk imprisonment. Maurice is expelled for indiscretions and begins his employment as a stockbroker. Clive, meanwhile, is an aristocrat and pursues his career as an MP.

Durham learns of his friend Lord Risley’s arrest for sodomy and attends his trial. This shocks Durham into questioning his relationship with Maurice and the risk this has to his career. He cools the relationship with Maurice and disappears to Sicily for a while and eventually marries, supressing his sexuality. This naturally upsets Maurice but he eventually pursues the under gamekeeper (Rupert Graves) on Durham’s estate, becoming dangerously involved with someone from a lower class. Maurice is one of the few British films that directly deals with the subject of homosexuality. There have been gay characters in Merchant-Ivory productions and such films as Victim (1961), Derek Jarman’s Sebastiane (1976), Sunday, Bloody Sunday (1971) and of course there was the wonderful My Beautiful Laundrette (1985). It was a bold addition to the Heritage Cinema canon. As ever with Merchant-Ivory productions, the production values, set decoration and costumes are first rate. This time James Ivory cleverly chose a French cinematographer, Pierre Lhomme who is well represented on the extras on this BFI release, as he would bring in Ivory’s own words a European sensibility to the cinematography. There is a deliberate awkwardness and sensitivity to the way the homosexuality is portrayed, especially in the scenes between Grant and Wilby, perfectly capturing young love in an environment of taboo and illegality, given this is set a couple of decades after the Oscar Wilde scandal. There are also several wonderful cameos by renowned character actors in the film including Barry Foster as the popular if bigoted professor, Denholm Elliott (who was gay himself and died of AIDS several years after this film) as a doctor and confidante of Maurice’s. In one scene Maurice tries to confess his homosexuality, but in a round-a-bout way with the doctor believing he has the more manly venereal disease and asks him to drop his trousers. There is also Ben Kingsley as a quack hypnotherapist who in the end has the most rational answer, to move to another country such as France or Italy where his love is not taboo and legal.

The extras are plentiful, including stage and private interviews with Ivory and Lhomme, a recent interview with Wilby, a recently filmed relaxed discussion of the making of the film and playing homosexual roles by Grant and Wilby and a thorough booklet with essays, a contemporary review and an excellent interview with Wilby. There are also almost 40 minutes of extra deleted scenes. The HD transfer is sumptuous, bringing out the details and depth of imagery well.