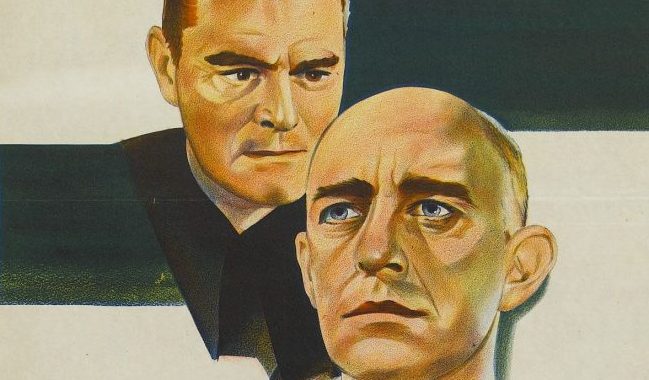 Released by Arrow Academy, The Prisoner (1955) is now a forgotten film, but when originally released it was well received, nominated for a number of awards and was criticised in many countries for being both anti-Catholic or pro-communist. It had been written and directed on the stage by Peter Glenville who also directed the screen version; most of Glenville’s films were adapted from stage versions he had previously directed. Of the few films he made, these included Becket (1964), Hotel Paradiso (1966) and The Comedians (1967), the last two also starring Alec Guinness.

The film is set in an unspecified country, but clearly a central or Eastern European country that has become a communist state in post-war Europe. Indeed, the external shots look Central European, but were shot in Bruges. It opens with a service in a large Cathedral presided over by the Cardinal (Guinness), a national hero for having opposed the Nazis, even under torture. One of his vergers passes him a note that states that the police are there to arrest him. He scans the crowd and sees the police who after the service take him away for interrogation. The Cardinal is then taken to jail where he is mocked by the jailers and is interrogated by a former doctor, now working for the State. The interrogator (Jack Hawkins) tells the Cardinal that he has been arrested for treason and must make a written confession. “Do you want the truth or my confession?” replies the Cardinal. Over the following weeks he is deprived of sleep, questioned in the middle of the night and constantly questioned. The interrogator is also under pressure from the authorities to get the confession. The Cardinal’s deceased mother is even wheeled in front of him to which he breaks down and adds that he never loved his mother. Eventually, much to the disappointment of his supporters he does sign a confession with the background of armed rebels and activisits being rounded up. The Cardinal is put up in front of a show trial.

Although the film about the battle of wills between the stoic Cardinal and his Machiavellian interrogator does not give a name of where the film is set, nor put a name to the characters, it nevertheless was obvious to many that the film was clearly about two Cardinals arrested and put on trial in two Eastern European Communist countries. Probably the one with the highest profile is Cardinal Mindszenty of Hungary who in 1948 was arrested, put on a show trial for treason and sentenced to life. He was finally released in 1956 following the Hungarian Uprising, the year after the film was made . The other was in Yugoslavia, now Croatia, when Catholic Cardinal Aloysius Stepinac was put on a show trial after the war. The difference was Stepinac, although also arrested for treason was tried for collaboration with the Ustashe regime and the Nazis, whereas Mindszenty fought the fascists.

Little has been written about the film, even by Guinness himself. Yet, interestingly, according to Neil Sinyard on an extra on the disc, Guinness became a Catholic convert a year after the film was made and in his autobiography he makes barely a mention of the film. As a film, it makes little effort to alter from Bridget Boland’s stage version. Hardly surprising given that Boland adapted the screenplay and director Glenville had also directed the stage version. As a result there are many passages of the film that are actually quite dull. However, Arrow Academy have to be applauded for reviving this long forgotten film, surprising given that it stars both Guinness and Hawkins, two of the most enduring British actors of the decade, sparring off against each other.

There are only a couple of extras on the disc. One is a talk on the film by film historian and lecturer, Neil Sinyard who gives some good context and incisive commentary on the film. The other is a selection of commentaries on the film.