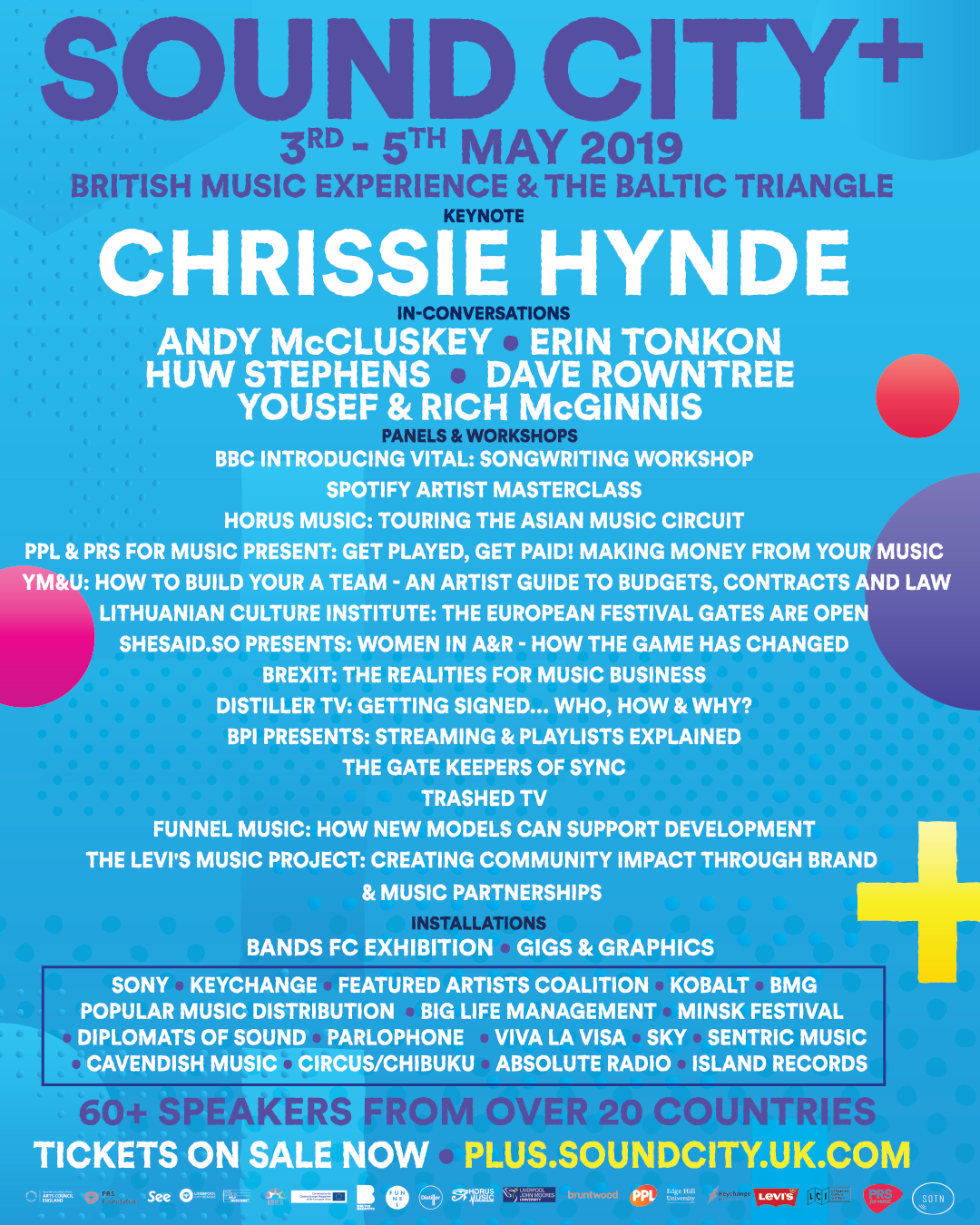 The countdown is now on for the Sound City festival and its sister conference Sound City+ in Liverpool, creating the most packed edition to date across Friday 3rd– Sunday 5th May.

Now the award-winning, independent and champion of new and emerging music is incredibly proud to reveal more amazing guests coming to the city as part of an illuminating, inspiring and enchanting weekend of music, arts, conversation, creativity and exploration.

And first up, it doesn’t get much more exciting than Sound City’s new conference guests, with three iconic new names now announced.

With a published memoir and a book of her art under her belt, American singer-songwriter Chrissie Hynde has continued to make a significant impact on the arts for nearly 40 years. The American singer is best known for her work with the Pretenders. Over her illustrious career, she has firmly cemented herself as a global rock icon and one of the most influential and inspiring female musicians. In the historic setting of Liverpool’s Cunard Building, Chrissie will be chatting with Absolute Radio’s Danielle Perry as the Keynote speaker on Friday 3rd May. Next up, there are two very special In Conversation guests to savour. Firstly, Andy McCluskey is a music industry veteran; an accomplished singer, songwriter and public speaker.  As the lead singer of Orchestral Manoeuvres in the Dark as well as the co-creator and co-songwriter of Atomic Kitten, he has earned 60 gold and platinum album and single awards and sold over 15 million albums and 25 million singles, and joins Sound City+ Trashed TV on Saturday 4th May. And not everyone gets the chance to work with one of their heroes, but this is the reward that was granted to New York-based engineer, Erin Tonkon. From having David Bowie’s picture adorned on her bedroom wall, to engineering, mixing and performing backing vocals on his Grammy award-winning final album ‘Blackstar’, Erin has achieved feats that most can only dream of. Catch Erin’s In Conversation on Friday 4th May at the British Music Experience.

New panels at Sound City+ include Getting signed…Who, how and why?; In Association with Distiller TV and SOTN, BPI Presents: Streaming & Playlists Explained; The Levi’s Music Project: Creating Community Impact Through Brand and Music Partnerships; and How to build your A team: An artist’s guide to budgets, contracts and law In association with YM&U, all featuring guests from around the world debating the key issues challenging the music world today.

New this year is Trashed TV,  a fresh and unique project that takes the form of a live magazine. It aims to celebrate all things creative through multiple mediums, offering a platform for both emerging talent and established names to share their opinions, art and anecdotes. Trashed will be interviewing some very special guests and also be talking to some of the brightest young bands around giving SC+ attendees the chance to experience personal insights into the music industry from the bands.  PRS for Music and PPL will host a delegates’ drinks reception at Love Lane Brewery Delegates Lounge, sponsored by Bruntwood, to close the Sound City+ Conference and kick off the live festival weekend.

Gwenno is joining Sound City with a special one-off performance of brand-new works with her producer, Rhys Edwards, and some of the region’s most exciting emerging female talent. The project encourages the exploration of concepts inspired by a sense of place and people, drawing from Liverpool’s rich and varied communities. The material will be created on a five-day residency as part of Both Sides Now, a pioneering initiative from music charity Brighter Sound. For more info check https://www.brightersound.com/gwenno-in-liverpool/

Sound City is proud to work with many leading and innovative partners during the campaign. These include the Arts Council supporting new artistic and industry talent;  PRS Foundation’s The Open Fund for Organisations, Baltic Creative CIC, home to some of the North West’s most pioneering creative and digital talent; Bruntwood, a family-owned business that has long supported Liverpool’s cultural vibrancy; PRS for Music, represents the rights of songwriters, composers and music publishers in the UK and around the world; PPL, the music licensing company who represent independent and major labels; Sound City and Modern Sky’s Innovation Partner, Edge Hill University and the official Cultural Education Partner, LJMU. Sound City 2019 is also working in partnership with The Cavern Club and official curators Horus Music, Distiller TV and SOTN and Funnel Music who are bringing you some of the best new music from across the UK and many exciting showcases from Leeds College of Music, BIMM, Edge Hill University in association with Modern Sky UK, Kycker, DIY, Gigwise, End of Trail Creative, Modern Sky, Sentric Music, SESAC, CD Baby, Lithuanian Culture Institute and Zandari Fiesta.

Friday 3rd May, Saturday 4th May, Sunday 5th May