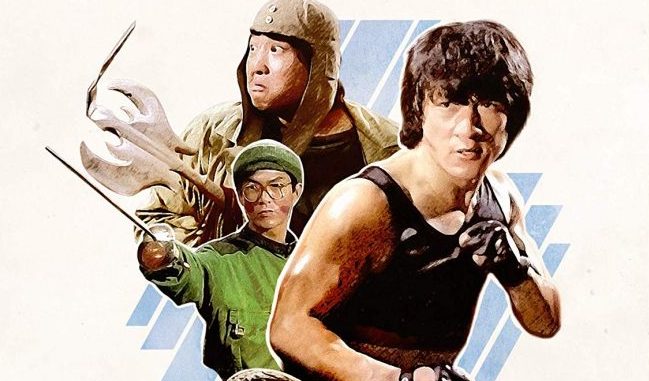 The latest Jackie Chan release from Eureka Entertainment is his 1984 martial arts comedy Wheels on Meals (1984), a cheap looking kick about adventure. Released for the first time in the UK on blu-ray and restored with a 2K scan it is a film for Chan fans only. Already by the early 1980s Chan took over from Bruce Lee as the international star of the Hong Kong action packed martial art films beginning with Yuen Woo-ping’s Drunken Master (1978) (also released by Eureka). The comic elements were a clear departure from the more po-faced Bruce Lee films and the often inventive Shaw Brothers martial-arts films of the previous decade. However, in time the same old schtick was wearing for some, but continued to consistently entertain for Chan fans.

Wheels on Meals really only departs with its setting. The film is filmed and set in Barcelona and has David (Yuen Biao) and Thomas (Chan), two street food vendors who run a food delivery surface. Not long into the film they run foul of a gang of bikers in a main square in the city. They see them off simply with a skateboard and some artistry martial arts moves. Later they run into more trouble when they come across David’s father’s girlfriend, Sylvia (Lola Forner) who is working as a pickpocket in the town. Both David and Thomas are smitten with Sylvia, oblivious to the trouble she draws them into.

It’s slapstick at its cheesiest and the film is terribly dubbed and irritating whether seen in either the English or Chinese versions. The acting is poor, making it look as bad as any of those terrible European slapstick comedies of the 1970s. What is undeniable, however, is the artistry and choreography of the fight sequences which are demonstrated in some of the extras on the disc with some interesting outtakes that can show both how clever and well timed the action is (under Chan’s watchful eye), but also how potentially very painful the stuntwork the principles carry out is. Chan was, and still is, an absolute perfectionist. Extras on the disc include tons of interviews with the cast and crew.

Interestingly the film was, of course, a huge hit in Hong Kong as well as Japan. In Japan it was released as Spartan X; a trailer for this Japanese version is also included on the discs extras. Spartan X was so popular a film that led to a popular ‘beat ’em up’ arcade game going under the same title, still a cult favourite among gamers.