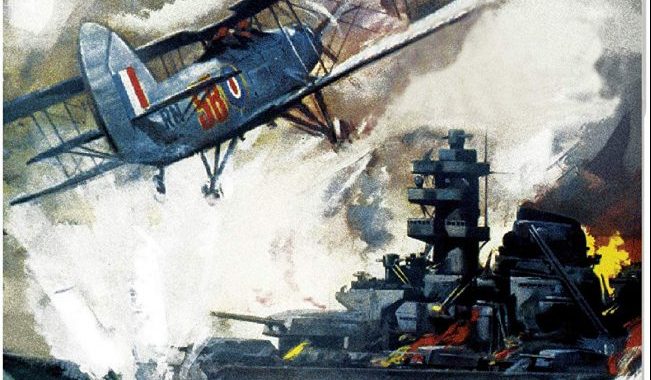 Released by Eureka Entertainment with a nicely illustrated poster design on the sleeve, Sink the Bismark! (1960), although made by 20th Century Fox, is among the last of the cycle of hugely popular British war films made after the Second World War through the following decade and a half. It would be fair to say that after the war, Britain endured something of an enuii, for although the country was among the winning side in the war and had a stake, albeit a smaller one, in the world order after the war. Britain also continued her decline as a world power, despite the war having upheld the country’s moral superiority. These films also reinforced Britain’s identity in both the different armed forces and class and national structures. They were usually from the perspective of the officer class in the post-war film with the exception of such films as Dunkirk (1958).

Most of these films of course are based off true stories and events in Colditz, the Battle of Britain, Greek or French resistance, Dunkirk, the dam busters or Burma. In that respect Sink the Bismark! is little different. However, the central character, Captain Shepherd (Kenneth More) is a fictitious character and the film makes this clear from the start. Based off an historical novel by author C.S. Forester, author of such adventure stories as ‘The African Queen’ adapted for the screen and given some emotional weight by Edmund H. North. More plays against his usual type as the jovial happy-go-lucky overgrown school kid he played in such films as Genevieve (1953), Doctor in the House (1954) or Reach for the Sky (1958), here playing a strict hard nosed disciplinarian who takes over command of the Chief of Operations for the Admiralty replacing the previous incumbent who believes that there is too much responsibility and not enough sea. As the film develops we see Shepherd becoming a more human character breaking down the reserved British sense of duty as he leads the battle from Whitehall. Following some newsreel footage from the beginning of the war and the launch of the Bismark in 1939 we leap forward to 1941 and the perilous situation Britain finds itself in and More’s Shepherd walking across Trafalgar Square. Beyond the Shepherd character and some typical artistic license, the film takes some pains to accurately portray the story of the pursuit of the Bismark, although Lindemann might as well be fictitious given his misrepresentation in the film as a Nazi villain. The ship was among the Kriegsmarine’s pride in the Third Reich following the equally ill fated Graf Spee which was scuttled and sunk in 1939. The Bismark captained by Captain Ernest Lindemann (Carl Mohner) is reported as having left the Norwegian fjords with the Prinz Eugen battleship, having not yet seen action. Shepherd orders ships such as HMS Hood to engage, with the loss of the Hood after the initial engagement. It soon becomes apparent to the Royal Navy the superior strength of the Bismark. Nevertheless, Shepherd engages in a game of cat and mouse with the German battleships led by the Bismark.

An interesting comparison would be made with another similar story, Battle of the River Plate, made 4 years earlier as it follows several ships pursuing the Graf Spee in the South Atlantic in 1939. Short of the obvious that the earlier film was in Technicolor and a 4:3 aspect ratio, while Sink the Bismark! is black and white (more standard for a 1950s British war movie) and in Cinemascope, there are as many similarities as differences. Both films deal with the tactics of naval battle, not allowing themselves to become entwined in any love interest or family drama (short of Dana Wynter’s charming and dutiful WREN); even the relationship between Shepherd and his son serving on the Ark Royal adds some emotional gravitas and sense of sacrifice to the film. Like River Plate, Lewis Gilbert’s Bismark does a good job with the complexities of many different ships and players working together without the characters meeting. The film was directed by Lewis Gilbert, a director who is well versed in handling action.

Despite the obvious higher production values, Sink the Bismark! provided one of the last hurrahs of the great British war films and includes the usual line-up of both stock and fine British character actors. Beautifully presented in the original aspect ratio, Eureka’s HD transfer looks good. The one main extra on the disc is a highly informative and well presented explanation of the film by film historian Sheldon Hall on the context of when it was made and it’s place among the canon of fine post-war British war films.