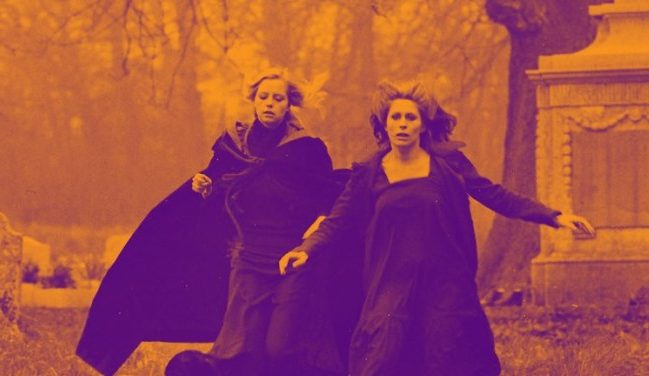 Spanish filmmaker José Larraz is not a household name; he is not even a director thought of much by horror or cult film fans. Yet he is an interesting, even untapped director. Although Spanish, and has made many films in his native Spain (especially after the fall of Franco in 1976) he also made several key films in Britain in the 1970s. One of his best known films is Symptoms (1974) with Donald Pleasance’s daughter, Angela in the lead and released in recent years by BFI in their celebrated Flipside series. The other well known film included, on this set is the underrated Vampyres (1974), his best genre film.

His films can be very eerie, as the 3 films in this box set collection released by Arrow Video attest to. Eroticism is also something that permeates through the filmmaker’s oeuvre. This plays out in the earliest film in the collection, Whirlpool (1970). This was Larraz’s very first feature. Like his other British films, it is set in a rather deserted, bleak looking and wintry Home Counties. There is a sleaziness in Whirlpool that goes beyond the darkest of British films. Indeed, it is hard to watch without thinking of the original of this style of film, Michael Powell’s Peeping Tom (1959); indeed the protagonist is also reminiscent of another similar type of film, such as Hywel Bennett’s charming psychopath in the Boulting Brother’s Twisted Nerve (1968).

The story has a model, Tulia (real life model, Vivian Neves) who is charmed by a vampish middle-aged woman, Sara (Pia Andersson) who invites the naïve Tulia back to her country cottage for the weekend. We get a sense that one of the other previous girl’s, Rhonda has mysteriously disappeared. Sara tells Tulia that she leaves with her strange nephew, Theo (Karl Lanchbury) who she claims is a talented photographer. As the weekend progresses, Tulia foolishly allows herself to be sexually taunted by Sara and Theo. It soon becomes dangerous for Tulia. After being seduced in a game of strip poker and a lesbian lovemaking session with Sara, Tulia is invited to a pub with Theo and his mate. On the way back, the creepy pub friend molests Tulia, stops the car and rapes her. This seems to give Theo the horn who photographs the rape and even allows a penny whistle playing tramp in on the action.

This is a small rare film that deserves more of a cult following. Lanchbury, a Larraz regular, is well cast as the blonde mod looking seedy character (he also appeared in Vampyres). He is actually pretty good, effective and suitably seedy. Although made after this film, he is reminiscent of Shane Briant’s handsome psycho in the Hammer film, Straight On Till Morning (1972). This is a small film with some flawed dialogue, but has an air of menace and seediness throughout. There are interestingly many superb extras on the disc including an introduction to the films of José Larraz by Kim Newman who focuses on Whirlpool over the more obvious choice, Vampyres. There is also an interview with Vivian Neves on Michael Parkinson’s chat show. The interview is interesting mostly for it’s jaw dropping sexism from Parkinson. The middle film is Vampyres, an underrated and genuinely eerie vampire film (even though there are no fangs or mention of vampires). On the surface it is similar to the erotic lesbian vampire films from Hammer and, while it retains an element of the gothic, it is set in contemporary Britain. The story, atmosphere and location, like Whirlpool, feels pretty bleak. It opens with the murder of two lesbians love making on a bed. Leap forward to a couple arriving on the grounds of a castle with their caravan. Before they arrived they saw two young women mysteriously hiding behind bushes as they passed in their car. This, along with James Clarke’s jazzy, equally eerie score gives frisson of strangeness to the film that exists throughout. The girls live in the castle. They are Fran and Miriam (Marianne Morris and Anulka) who indulge in lesbian lovemaking and spend their time luring men to their home and feast on their blood. One man (Murray Brown) is a kept man and growing weaker by the day as his blood is drained.

There is not much of a plot to Vampyres, and is the better for it as it is driven by the atmosphere. Despite it’s Hammer style, nowhere is it mentioned they are vampires, other than the title, they seem to exist running through the woods and cemetery during the day and there are no fangs. Like Whirlpool, the two actresses were models rather than actresses (their voices were dubbed) and they do a good job. There is a nice sense of location with the grounds and interiors at Harefield Grove (the same location as Symptoms) and the shots of the exterior of the castle are Oakley Court, Windsor, the location for many Hammer films and for The Rocky Horror Picture Show (1975).

José Larraz is given a good deal of context in this collection. There are plenty of extras on each disc including extensive interviews, including archival interviews with Larraz, a commentary by Tim Lucas on Whirlpool and a fascinating commentary by Kat Ellinger on Vampyres. An all in all thorough package.