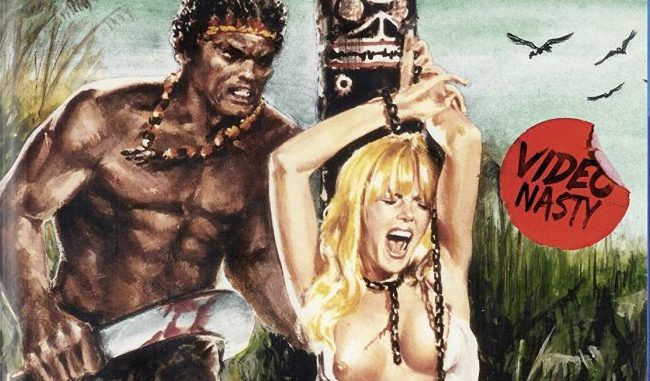 The Devil Hunter (1980) is one of those so-called labelled video nasties released on VHS, this one by CineHollywood in the early 1980s which resulted in its banning in the UK. As a result it became one that hunters of video nasties would search for in places like Germany where the film was readily available. What is clear is that this re-release by 88 Films has never been better to look at (as can be seen in the below before/after grading video) released in the HD 1080p transfer. The year 1980 was very much the height of the sub-genre of cannibal movies with 8 key releases in that year alone. Although originating in Italy with the films of Umberto Lenzi, Ruggero Deodato and Sergio Martino there were also several key films from Spanish-French co-productions, especially from the Eurociné company; a recent release by 88 Films was another Eurociné release from 1980, Cannibal Terror, an even less superior film to The Devil Hunter.

Also significant with this film is that this was the first of a couple of cannibal films directed by the King of Sleaze euro trash, Jess Franco. Franco has to be one of the most prolific directors of all time dipping in and out of horror exploitation throughout his career with a high degree of nudity in his hundreds of films. The high points in his career include the euro films he made with Christopher Lee including Count Dracula (1970) and the cult Vampyros Lesbos (1971). Here, The Devil Hunter is no exception as he does not pass up the opportunity to have bare breasted blonde victims and savages running around. Indeed, nor does he pass up the opportunity for lots of close-ups of pubic hair.

The plot of The Devil Hunter (usually titled without the article and released in Germany as Jungfrau unter Kannibalen), for what it is, is bog standard. White women are taken by a tribe of cannibals, are staked to a tree when some kind of voodoo and a totem summons a blank eyed demon to eat the flesh of the victims. One of the victims (running around for most of the film semi-naked) is a victim of kidnapping who has escaped her captors who are also after her, even when she is at the mercy of the cannibal tribe. An adventurer (prolific actor and macho guy Al Cliver) has also been paid to go and fetch her from the villains.

While this might not be the nastiest of all the cannibal films, it is a little hard these days to see why the film has the reputation it does; it is neither the worst or nastiest and far from being the best of Franco’s films. It still maintains the slow shooting, lingering style of a Jess Franco film, whether it’s the shots of a naked body, the graphic violence, eaten flesh or the close-ups of nudity. Unusually for an 88 Films release, the film is only available in dubbed English, but this should not detract as most of these films were dubbed anyway, even when shot in their original language. The audio, also sometimes distorted, harks back to the original release. Again this should not detract the viewer. The one great extra this release has is a documentary on the career of the enigmatic Jess Franco looking at his career in its entirety. Go hunt out The Devil Hunter.