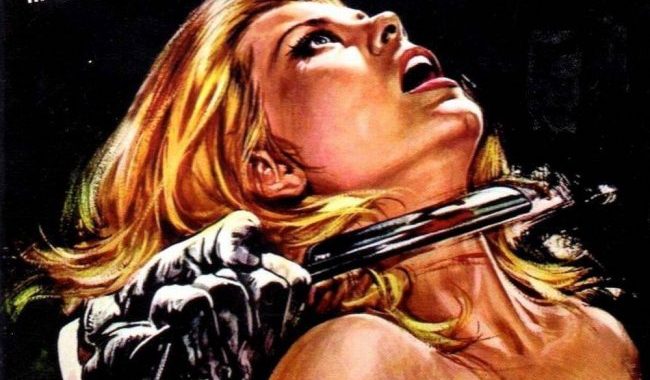 The Iguana and the Tongue of Fire (1971) Blu-ray Review

While not the first Italian giallo, Dario Argento’s The Bird With the Crystal Plumage (1970) (that is usually cited as Mario Bava’s The Girl Who Knew Too Much, 1963), but Bava’s film did open the flood gates to an already established sub-genre of psychological horror thrillers. As a result, the films that followed had equally lurid and extravagant titles as Four Flies on Grey Velvet, The Lizard in a Woman’s Skin, Black Belly of the Tarantula, The Case of the Scorpion’s Tail, The Bloodstained Butterfly and this one, The Iguana and the Tongue of Fire (all 1971), perhaps the most curious of all. These films also share many other tropes and a similar sense of style. This would include a mysterious, perverse killer often seen from a P.O.V. angle wearing leather gloves, as he or she slashes up their (usually female) victims. They also have a wonderfully kitsch soundtrack and are set in very distinctive locations.

What sets The Iguana and the Tongue of Fire apart is its Dublin locations, a location not often seen in vintage films, although had been central to Tony Richardson’s The Girl With the Green Eyes (1963). In the opening of the film we are introduced to the traffic and sights of Dublin, looking great in the new 2K restoration from the original 35mm camera negative and presented in 1080p HD on this Arrow Video release. Naturally, it’s only a few minutes into the film that we see our first murder. A bourgeois woman is getting ready for bed when an intruder emerges from the shadows and throws acid in the face of the victim before slashing her throat. This is the first violent murder and presents some of the most ridiculous special-effects in the film, an obvious dummy head with a rubber neck being split with mechanised rolling around in the victim’s head.

The dead woman is the mistress of the Swiss Ambassador Sobiesky (Anton Diffring) and is found in the boot of the family limo in the presence of his son and estranged wife (Valentina Cortese). In time a number of other similar throat slashing and acid burnt victims turn up. The Ambassador is the initial suspect, but as usual with these films suspicion falls upon a whole mixed bag of characters, even the Irish detective, John Norton (Luigi Pistilli) investigating the case; Norton has his own demons to deal with including his past brutal methods against suspects. Red herrings are thrown haphazard all over the place with some heavy handed fast zooms on sunglasses, mysterious middle-aged men with red beards and bizarre secret family members of the family and a screechy soundtrack.

It has a standard giallo plot, but is good fun none the less. There is of course a sexy female lead with the daughter of the Ambassador played by giallo regular Dagmar Lassander who is having an affair with Norton. This of course gives director Riccardo Freda the opportunity to film Lassander in the nude. The Dublin backdrop adds a unique setting and atmosphere to the film. As is typical with Arrow Video film releases, The Iguana with the Tongue of Fire disc is laced with some fantastic extras including an honest appreciation of the film by Richard Dyer, an interview with Lassander who discusses her career and how she was under pressure as an actress and was controlled and manipulated by others. In addition there is a look at the soundtrack by Stelvio Cipriani by Lovely John, although the music could have been played a little more on this extra. Cipriani’s score is the typical soothing kitsch giallo score. I for one would be happy with more giallo releases from this period and it is great that these films are being re-evaluated by such labels as Arrow Video.