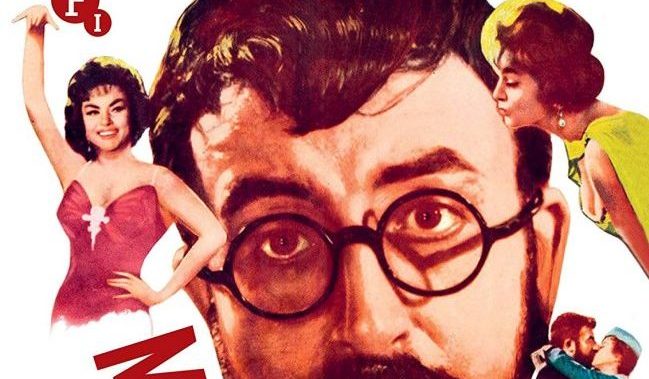 Released on dual format discs by BFI, Mr. Topaze (1961) is very much a rarity from the oeuvre of comic genius Peter Sellers. What sets this film apart is that it was the only featured directorial major film by Sellers. He had previously co-directed with Richard Lester, the zany cult classic short comedy The Running, Jumping, Standing Still Film (1959) also included on this BFI release as an extra.

Mr. Topaze is actually based off a play by the French writer, Marcel Pagnol. This was surprisingly the 8th film version of Pagnol’s play and for the most part sticks closely to the original work. His plays deal with provincial life (and Provençal life, his home turf). His most notable works were the duo ‘La Glorie de mon Pere’ and ‘La Chateau de ma mere’ as well as the Marius trilogy of films that he directed himself in the early 1930s and among French cinema’s most beloved films.

The focus of Mr. Topaze (the play was simply called ‘Topaz’) centres on a rather naive provincial character. M. Topaze (Sellers) is a teacher at a school in an undisclosed French town. He is an unassuming individual and has a crush on the Headmaster’s (Leo McKern) daughter (a young Billie Whitelaw), but is too shy to let her know. He is an honest fellow and refuses to give good grades to an aristocrat’s (Martita Hunt) young son, leading to his sacking. A corrupt government official (Herbert Lom) uses this innocent foil as the perfect cover to a corrupt business scheme along with his mistress (Suzy Gray). Topaze relocates to Paris and becomes rich, but must face up to becoming corrupt himself.

Released in High Definition with original aspect ratio 2.35:1, it is a release with plenty of contextual extras, but surprisingly little on the film itself. The Eastmancolor looks a little washed, not bringing out the HD to its best advantage and though neither a great film nor a particularly funny one, it does remain faithful to Pagnol’s play. Sellers himself hardly breaks into one of his iconic characters such as Fred Kite, the Indian doctor or Inspector Clouseau, but is convincing as Topaze who looks here like a fully sized Toulouse-Lautrec. Sellers is also re-united with his former co-star from The Ladykillers (1955) and the Inspector Clouseau films, Herbert Lom. It is actually Lom who brings life to the film in the kind of performance that he is best known for as the arrogant corrupt personage. Elsewhere, the film is peopled by a host of familiar faces of British character actors including Whitelaw, Michael Gough (who had get a late career offering as Alfred the Butler in Tim Burton’s Batman, 1989) and a cameo appearance by John le Mesurier as a blackmailer.

The extras are mostly out of the BFI archives, including a 1967 interview with Sellers for a film TV show, going into this enigmatic star’s lifestyle and influences. There are also interviews with McKern’s daughter who talks about his career, a most bizarre interview with Seller’s clairvoyant and best of all, an interview with director John Boulting who discusses Sellers and the state of the British film industry in 1967 (when the interview was filmed); Boulting had directed in I’m All Right Jack (1959) and Heaven’s Above! (1963). In addition to The Running, Jumping and Standing Still Film, there is also another, less interesting short. Not a great film, it is none the less an interesting release and revives a forgotten film from Sellers.