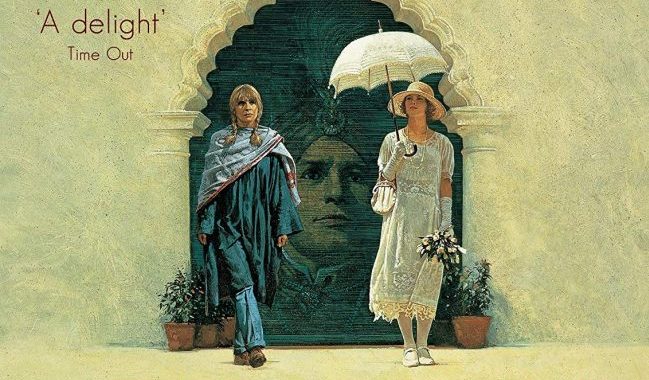 BFI have recently released a number of dual format discs that celebrate the career of the James Ivory-Ismael Merchant partnership. Between them they forged and drove Heritage Cinema in Britain through the 1970s – 1990s. Recently released by BFI was Maurice (1987), the middle of three adaptations of E.M. Forster novels set in Edwardian Britain by the partnership. Their films are also well known for their films dealing with Colonial Britain in India. Their earliest films include The Householder (1963) and Shakespeare’s Wallah (1965) (also released by BFI) and this one, Heat and Dust (1983), which also includes the hour long mini-feature, Autobiography of a Princess (1975).

Like many of the Merchant-Ivory films, Heat and Dust was made on a small budget but certainly does not look it. It is dual story film set in modern 1982 and 1923. In the modern part of the story, Julie Christie stars as Anne, a middle-aged woman who is visiting India and is researching the story of her Aunt in 1920s colonial India after inheriting her diary. She discovers that her Aunt Olivia (played by Greta Scacchi in an early) arrives in the British Raj with her husband (Christopher Cazenove). He is nice, but a typical colonial and wants to keep her as his doll. Olivia comes across others and find them a mixture of racists, stuffy and traditionalists. Although conservative, she is drawn more to the colour of India, it’s spirituality and sensuousness. This draws her to the Nawab of Khatm (Bollywood star, Shashi Kapoor), the ruler of a neighboring state.

In time, Olivia finds herself in the middle of three men: her husband, the Nawab and a friend, Harry (Nickolas Grace) who Anne comes into contact with in the 1982 part of the story. Before long Olivia finds herself pregnant and alienated by many of those in the British Raj.

Single handedly, Merchant-Ivory have been at the apex of Heritage Cinema in Britain and became one of the great exporters of cinema. What is surprising though is that for the past 20 years that had been a struggle for the independent filmmakers. Heat and Dust was made on a small budget and in fact ran out of money during the making of the film. Yet, two years after this film, the team made A Room With a View (1985) and the subsequent Forster adaptations. Like these films, Heat and Dust is set in a similar period in England’s past. It also has other aspects in common with A Room With a View, a story about a young woman who finds herself drawn to the sensuality of their new foreign surroundings.

Available for the first time in the UK on Blu-ray, the 4K restoration looks superb. The one thing that can be said of the Merchant-Ivory films is that no matter when they were made, they are timeless. There earlier films resemble the films of Satyajit Ray, but their later Heritage films look timeless and do not seem to age. Director James Ivory’s attention to detail and the production design look all the better in 4K; that was also evident with Maurice.

Also accompanying the film is the mini-feature, Autobiography of a Princess. Featuring just two actors – a young Madhur Jaffrey and James Mason, Jaffrey plays an Indian Princess now living in Kensington, London. She invites her father’s former tutor (Mason) to her home and shares her memories and films of the days of the old Raj with him. The film was also written by Ruth Prawer Jhabvala, the writer of the novel and the script for Heat and Dust. Jhabvala is every bit of a part of the part of the Merchant-Ivory combo and it is hard to imagine their films without her contribution. As Ivory says in an interview on the disc, he is happy that these films are being shown together on one disc as they very much compliment each other.

There are many interesting other extras on the disc including an interview with Madhur Jaffrey who starred in both films, documentaries and vintage films from the 1920s and a 2017 interview with Scacchi and Grace who discuss in affectionate detail their recollections of making Heat and Dust among other extras. This is a very thorough coverage of the films and featurettes giving a great deal of context. Interestingly Ivory was conscious that Heat and Dust was made at about the time, or just after the runaway success that was Gandhi (1982), some of the story acting as something of a backdrop to Heat and Dust, as well as the successful TV series, ‘Jewel in the Crown’ (1984) and A Passage to India (1985). Nevertheless, it is also acknowledged that this film is more intimate.