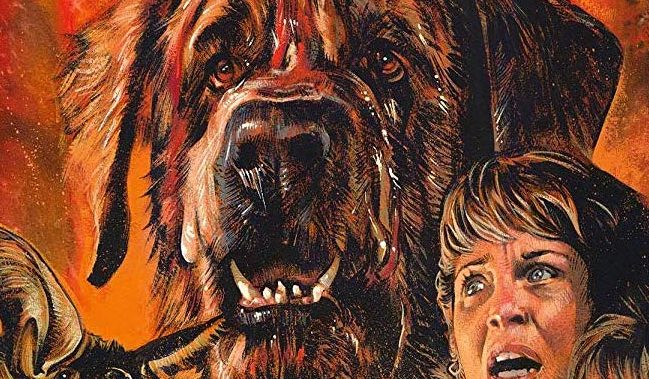 The recent release and remake of Pet Semetary (1989 and 2019) and prior to this the remake of It (1990 and 2017) demonstrate that Stephen King is still relevant in horror cinema. Did he ever go away? The answer surely is not really. In the late 1970s and 1980s, King’s novels were hugely popular and were often quickly picked up and adapted. The novels were often very original in that they could move away from the more traditional monsters of horror stories (of course there were exceptions such as the vampires of ‘Salem’s Lot’ and more than several werewolf stories). Some books (and subsequent film adaptation) even had killer vehicles (Maximum Overdrive, 1996 which he misguidedly also directed and was based off his short story, ‘Trucks’ and Christine, 1983) or kids with special powers (‘Carrie’ and ‘Firestarter’) and even a possessed killer mange (The Mangle, 1995). Cujo (1983) has a big rabid St. Bernard dog terrorizing a family. This release by Eureka Entertainment is in advance of a new release, reportedly in production.

The film opens with the domestic St. Bernard Cujo chasing a rabbit through a field until he ends up in a cave hole where the dog is bitten on the nose by a rabid bat. It goes on to center on the familial relationship of the Trenton family in rural California, although in the book was set in Maine. Vic (Daniel Hugh-Kelly) and Donna (Dee Wallace) live with their young son, Tad (Danny Pintauro). Vic discovers that Donna has been having an affair with a childhood sweetheart (played by her real life husband, the late Christopher Stone). Upset at his flagging career, Vic goes into town for the day while Donna and Tad take their car to be repaired. Soon Cujo is starting to show signs of of having rabies and begins to attack and kill people, including an abusive and alcoholic neighbour. Cujo belongs to other neighbours, but the Trentons know the dog, especially young Tad. They notice that Cujo is not looking so good and pretty much for the rest of the film the dog lays siege to Donna and Tad who trapped inside their car.

Looking at Cujo again, it is a better film than memory recalls. Accompanying the disc there are over 7 hours of extra material, including many new interviews and a 12 year old Making Of documentary. There are many strong elements that came together to make the film an effective siege story about a woman and her ill son besieged in a car by a rabid St. Bernard dog. Not least of all, as well as the stunt work and performances is the imaginative camerawork by the brilliant Jan de Bont who started out as Paul Verhoeven’s cameraman in his Dutch films and would later go on to direct the Speed films. His camera, the performances and director Lewis Teague show and demonstrate remarkable ingenuity with its limitations, including that it was shot in winter in northern California but depicts a hot summer’s day.

Released for the first time on Blu-ray in a HD 1080p presentation, the film is led by two excellent performances in Wallace and 6-year-old Pintauro, who Wallace identified as showing some remarkable acting abilities for his age and his lack of experience. There could never be a more complete release and package for the film as this one and makes a worthy addition to the Eureka! catalogue.