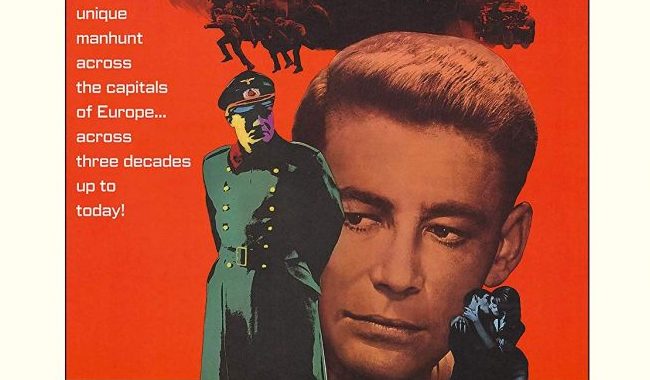 The Night of the Generals (1967) Blu-ray Review

From the credit sequence, there is an element of playing into the fetishisation of Nazi imagery. During the titles we see close ups of leather great coats, cap badges, iron crosses, the swastika and SS regalia and the notorious iconic skull. The Night of the Generals (1967) is based off a novel by German writer, Hans Hellmut Kirst, an author who wrote many World War Two set novels. There are so many incredible stories from the war that it has to be asked why it would be necessary to create fictionalised stories. But here, as in many such fictional war novels and movies, the background story blends and interweaves with the factual story or stories taking place in the film.

The film is set in 1942 Warsaw, France in 1944 and contemporary Hamburg. It opens with a fire fight taking place on the streets of Warsaw between German soldiers and resistance fighters. A pair of German investigators turn up after a prostitute has been murdered. So with the background of resistance, there is the sort of upholding of law taking place, despite the background of total destruction. The investigating officer is (the unusually cast) Omar Sharif as Major Grau. He arrives with another miscast German officer in the shape of Gordon Jackson. One of the German officers taking part in the mop-up campaign against the resistors during the Warsaw Uprising is a ruthless Panzer commander, General Tanz (Peter O’Toole).

Eventually the plot leaps forward 2 years to 1944 and the eve of Operation Valkyrie in which a group of German generals and Field Marshals are plotting the July plot against Hitler in Rastenburg. We even get to see Von Stauffenberg (Gerard Buhr) arriving to begin Valkyrie, as well as Field Marshal Rommel (Christopher Plummer) who is injured on the Western Front. Tanz is something of an art connoisseur, but his adjutant, Corporal Hartmann (Tom Courtenay) plans to run off with his girl (Coral Browne) and get away from the war. Hartmann observes Tanz having hot flushes and shows signs and glimpses of madness. This becomes all the more apparent after Tanz kills another prostitute and tries to pin the blame on Hartmann.

Despite the often muted colours, the 4K restoration of the film looks stunning on this Eureka Entertainment release and is nicely packaged with poster artwork on the cover of the disc (this is something that many disc releases by cult and classic labels do well these days). There aren’t too many extras on the disc other than a trailer and a commentary by writer Scott Harrison. Again presented in the original 2.35:1 aspect ratio, the film is all the better for it, rather than the often compressed or cropped image that versions shown on TV are often presented in, the viewer gets a much better authentic viewing experience.

In addition to the sharp imagery and nice presentation, there is also a bevvy of British names in the film as well as the aforementioned including Donald Pleasence (several times cast as a regular Nazi General character actor) and Charles Gray, as well as some unusual casting with some great British characters looking out of place in a German Wehrmacht uniform including the aforementioned Jackson, John Gregson, Harry Andrews and Patrick Allen. Some note should also be made of Maurice Jarre’s score that perfectly blends a more typical World War Two scoring with something a little edgier, reflecting the duality of genres in the film. A worthy addition to any fans of old war movies.