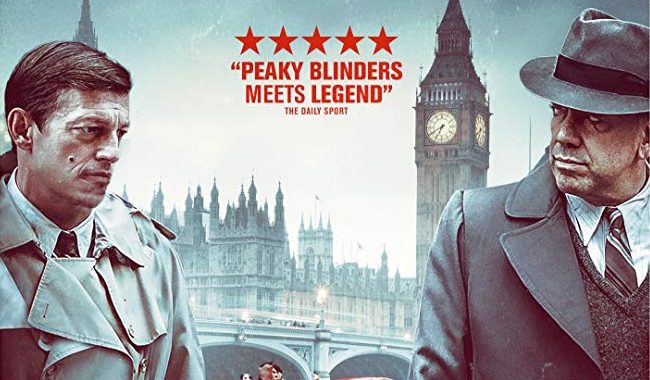 Although the British gangster film has roots going back to the adaptation of Graham Greene’s Brighton Rock (1947) and again with Get Carter and Villain (1971), it exploded as a genre in this country after the Guy Ritchie films Lock, Stock and Two Smoking Barrels (1998) and Snatch, as well as Sexy Beast (both 1999) with all the films that followed taking great capital on the cockney accents and laddish culture. The Essex Rettendon killings in 1995 created a whole sub-genre of their own following Essex Boys (2000) and the Rise of the Foot Soldier films. But of course if there are British gangster folk heroes, few equal the story and mythology surrounding the Kray twins with these characters inspiring many films with their violent running of London’s clubland and the underworld in the 1950s and 60s. Little surprise, therefore, that a British film should be made about some of the characters that preceded them, namely the rivalry of Jack ‘Spot’ Comer and Billy Hill, the latter being an inspiration and mentor to the Krays.

Made on a relatively small budget, the title of the film of course recalls the epic Sergio Leone turn of the century New York set gangster saga, Once Upon a Time in America (1984). The film opens in 1936 with Jewish racecourse heavy Comer (played by the film’s producer and co-writer, Terry Stone) and his lads preparing to go up against Oswald Moseley and his Blackshirts in the now infamous East End street battle, the Battle of Cable Street. Comer ended up serving time for his violent action. His rival at the time was the White gang, led by Alf White (Jamie Foreman) and between them they battle for the control of London’s Underworld. They don’t even let the Second World War disrupt their own violent turf war. Another member of White’s gang is also moving up the ranks, Billy Hill (Leo Gregory).

The film then follows the next few years up to the late 1950s with the violent bustling to be the King of the Underworld drifting between the rising and falling fortunes of both Hill and Comer until Hill understood publicity and the self-acclaimed King of the Underworld until Comer retired after he and his wife were brutally beaten, his wife eventually breaking the gangster code and naming and shaming Hill and his accomplices (including future Kray sidekick, Mad Frankie Fraser, played by Roland Manookian).

The films relatively low budget does the classic thing of betray some of the sense of place, namely the bars and the cobbled side street of the Eastcastle Street post office van that actually took place off Oxford Street. The clothing is realistic, but greater effort could have been better going into the overall design of the film. Added to that is the contemporary music, perhaps more realistically modern bands interpreting contemporary music has plenty of energy to it, although I doubt the rock and roll and skiffle sounds existing in the early 1950s.

Yet with the casting of the likes of Foreman and especially Stone as two of the gangster bosses, the film does follow the tradition of the modern gangster film, between them having appeared in plenty. If the store were transferred to say modern Southend, it would differed little from others, but it’s ‘true’ story gives it something of an ‘origins of the Krays’ about it. Nevertheless, like Pinky in Brighton Rock, there is something of the classic nasty diamond geezers that rings true. Famously, Hill said “I was always careful to draw my knife down on the face, never across or upwards, so if the knife slips you don’t cut the artery. Chivving is chivving, but cutting an artery is usually murder. Only mugs do murder.” And that is what is apparent with some of the characters in this film with some extreme violence throughout and murder is always accidental or an extreme, but face slashing with a switchblade standard.

Once Upon a Time in London continues to drive the British gangster genre forward, while at the same time adding to the folklore of these characters. It is enjoyable viewing for those who love these kind of films, but as usual, despite the lad culture that permeate the films, it still feels like a cheaper version of its American cousins.