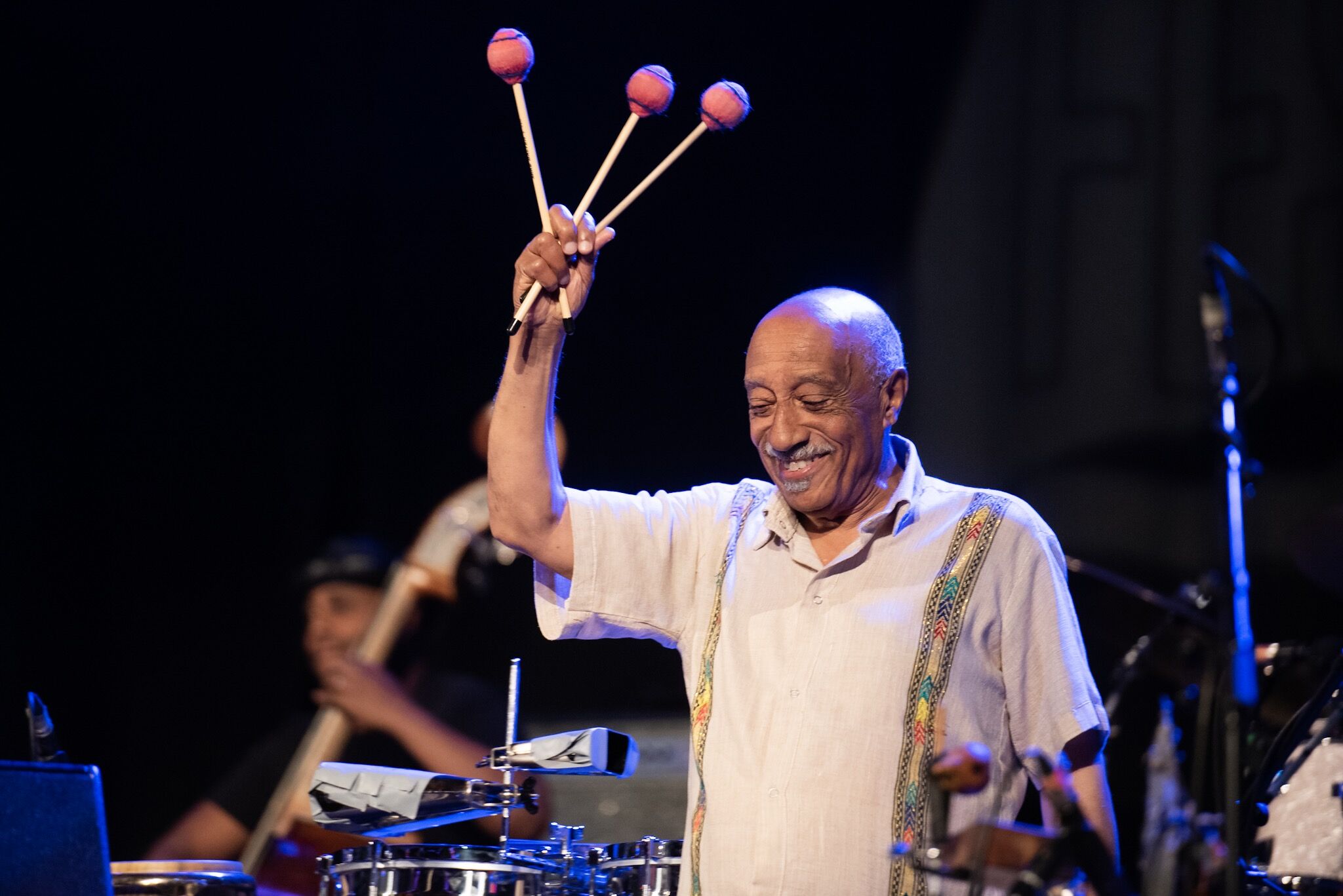 This year’s Glasgow’s Jazz Festival had its most exciting and coolest lineup for several years, reflecting this most versatile of musical genre’s recent resurgence, rewarded by a substantial increase in festival ticket sales. My first gig was an encounter with, as his saxophonist introduced him, ‘a legend in his own lifetime’, Mulatu Astatke.

Even if you don’t know the name, you’d recognize the music; Astatke has evolved one of the most distinct musical languages in jazz, one that’s been used for film soundtracks and sampled by everybody from Nas to Cut Chemist. Astatke took to the stage to cheers and to his vibraphone, for a long extended piece making full use of his trademark pentatonic scales and slipping off to a small drum kit centre stage, where he acted as bandleader.  This is music which simultaneously manages to sound steeped in atavistic tradition yet forward thinking, soulful yet playful  – perhaps timeless would be the best description. Certainly that would describe his signature piece Yekermo Sew, which he acknowledged as having brought him fame and a whole new audience through its use by Jarmusch.

It was a pleasure to hear him explain his way through his back catalogue, as he gave the background to an extended suite, Chic Chica, exploring African percussion, which gave all the musicians a chance to solo, including Astatke on organ. This was utterly trancelike, and allowed the drummer to take focus, though the polyrhythms at pints there were three drummers- were so intoxicating that I was convulsing in my seat, and I wasn’t alone.

After another extended piece on musical differences between West and East Africa, they launched into Yegell Tezeta, one of his best loved
(and most sampled) pieces, at which point the crowd revolted, erupting to their feet out of their seats – it felt like this should have happened ages ago – to reveal the youngest, most diverse crowd I’ve ever seen the Jazz festival attract, going crazy down the front. They weren’t going to let him go easily, and the band returned onstage for a more subdued encore, which was a fitting conclusion to the most joyous performance I’ve ever seen at Glasgow Jazz Festival.

Where could it go from here?  To outer space via the Planetarium at Glasgow Science Centre, where the duo of Herschel 36 were launching of their soundtrack album for Wonder Der Schopfung. This is an oddity form 1926, a German Kulturfilm from 1926, laying out all contemporary Teutonic knowledge of the cosmos, including the thrilling new Theory of Relativity (cue spaceships travelling through time) and imaging the end of the Earth itself.

This may have disturbed audiences at the time, though there are lashings of quotes from Goethe to remind us of the immortality of German culture. The special effects are laughably camp to a modern audience, however, and the film itself no great shakes as filmmaking, but Herschel 36 treated the material with dignity and respect, arguably giving the film a better soundtrack than it deserved, whether getting all ethereal in the cosmos or surging into Basic Channel- style technoid pulses for the time travel scenes.

A more conventional venue would prove to be The Blue Arrow, the city’s dedicated jazz club, an intimate basement bar where Theon Cross seemed genuinely surprised by the size and enthusiasm of the sellout crowd. The London jazz scene is on fire right now, and Sons of Kemet, the band he plays tuba for, one of its hottest properties, both musically and conceptually. Here Cross led a trio, playing his own material from his album Fyah. While Nubiya Garcia’s sinuous post bop sax lines did a lot of the heavy lifting, Cross still amply demonstrated the sheer range and versatility of this most maligned of instruments. He even spoke rather movingly about his dedication to the instrument before launching into CIYA, which took full advantage of the tuba’s guttural tones.

If Cross and cohorts are the future sound of London jazz, what of Glasgow? Mackintosh’s House For an Art Lover would prove an elegant venue for some comedown jazz on a Summer’s afternoon courtesy of some of the most promising young Scottish talent. Fergus McCreadie opened, a young pianist with immense technical chops who’s being hailed by some as the future sound of Scottish jazz. Scottish jazz has traditionally been rather hidebound and conservative; the London and LA scenes have recently exploded into public consciousness by expanding, and bringing electronic music and hip hop into the repertoire. McCreadie may think he’s doing the equivalent by working with Scottish folk music, but the latter pieces do just sound like folk music transcribed for piano, and a variant on Bonnie Banks of Loch Lomond particularly maudlin.

Luca Manning and Joe Williamson’s set is on surer, if not particularly adventurous ground. Manning is a young vocalist with a rich, honeyed voice which pairs perfectly with guitarist Williamson’s precise fret work. If he occasionally goers off tune, this just allows Manning – a born raconteur – more time to charm the crowd with anecdotes about his fledgling career and explanations of the music he’s chosen. And it’s a fascinating, ambitious, range, from jazz standards to bossa nova to even Doris Day, transformed by propulsive Velvets-style riffs from Williamson. All three of these young performers are clearly massively promising; I’d like to see them all push out the boat and take Scottish jazz to the next level, which I’m confident they’re capable of doing.