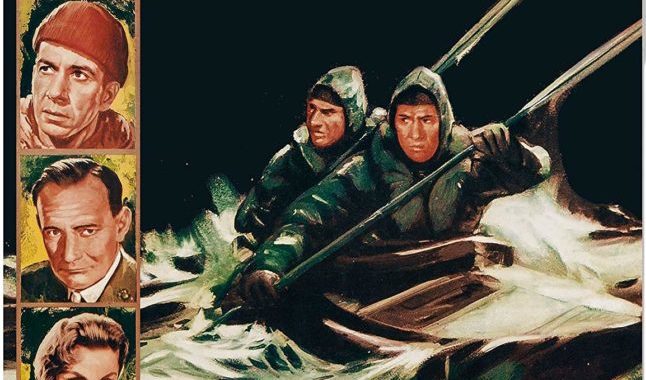 Made 10 years after the end of the Second World War, The Cockleshell Heroes (1955), though more widely seen today, was one of the films less commonly seen or one that was less talked about than say The Coliditz Story (1953) or Ice Cold in Alex (1958). All these films reflected British wartime heroism and the spirit of the British character and their sense of self sacrifice. There were many made both during and after the war that glorified this spirit covering all aspects of the armed services and life on the home front. Sacrifice and honour is at the core of all these films.

The Cockleshell Heroes was also sadly overshadowed by another film made the same year, The Dam Busters. Where The Cockleshell Heroes differs from other films though is that it was both in colour and is lighter in tone and humour than many other British war films, despite the dark ending. Directed by and starring Jose Ferrer, it is based off the real life story of Operation Frankton. In December 1942, this was an operation involving six two man kayaks who set off from a submarine off the French coast, canoed up an estuary to occupied Bordeaux where they were to carry out a commando raid on ships in the port, blowing them up with limpet mines. These men were Royal Marines who would come from a unit that would later be formed into the SBS (Special Boat Squadron). The mission itself of course was fraught with danger and only a small number would end up survivng the mission. This film follows the men from their selection process, their lives and even their family life to a small degree in order that we become emotionally invested in them. The names of the characters involved in the original operation have been changed, including Ferrer’s as Major Stringer who is based off the real life Major H.G. ‘Blondie’ Hasler.

Asides from Ferrer’s (who had been an Oscar winner for his role as Cyrano de Bergerac, 1950 and was nominated for one as Toulouse-Lautrec in Moulin Rouge, 1952), the cast in the film is a broad and familar one with lots of great British characters. Among those of course include Trevor Howard, familiar in many films as a tough and grizzled officer (although his real life military career was less honourable) as well as the likes of such regulars in war films as David Lodge and Victor Maddern, who between them both appeared in dozens of war films usually in small parts and have both have gone on record to claim that this film was one their favourites. Other familiar faces include Walter Fitzgerald and Karel Stepanek in their usual German officer or Gestapo roles and crooner Anthony Newley in an early starring role. There is also Christopher Lee, a jobbing actor back then who makes an appearance before his roles in Hammer films and here playing a submarine commander.

The only real notable extra on the disc is an approximate 30 minute discussion on the film with film historian Sheldon Hall whose extensive knowledge provides interesting background. Handsomely packaged as usual by Eureka Entertainment, it is an addition to their Eureka Classics Collection.