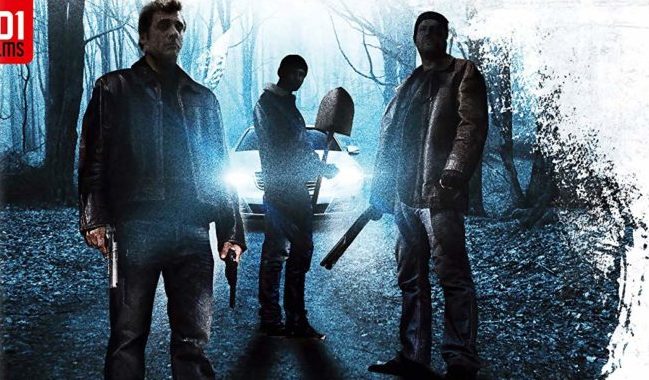 Of course a story about a child murderer or paedophiles getting their come-uppance at the hands of the victim’s family is not new. In Fritz Lang’s M (1931) it was the criminal underworld that cornered the child killer in highlighting that being a child murderer is the lowest of low criminals. Wes Craven’s shocking B movie, The Last House on the Left (1972) has a middle-class couple discover that the people who have broken down nearby had raped and murdered their teenage daughter and act out their revenge on the perpetrators. Then there is The Offence (also 1972) in which Sean Connery plays a Bracknell cop who thinks he has the child rapist who has been sexually assaulting school girls in his custody and beats a confession out of him, which in some senses was similar to the previous year’s only British giallo thriller, Assault. The most pertinent film in recent years was Prisoners (2013). In that film a couple of children go missing in a suburb with a mysterious camper van parked nearby. The father of one of the missing children kidnaps the suspected perpetrator and locks him up.

A similar storyline is played out in the Israeli thriller, Big Bad Wolves (2013), although the way it is presented and the atmosphere are distinctly differrent to Prisoners. What it has that is missing in the American film is some pretty dark black comedy. The story focuses on three men whose lives collide after the murder of a young girl. During the credits there is a stylish slow motion opening showing children playing hide and seek in an abandoned house. They find the red shoe of one of the girl’s who they realise is missing. The body of a girl is found in a nearby wood, decapitated and tied to a chair with her knickers around her ankles, clearly indicating that she has been sexually assaulted. As the police are there, the main cop, Miki is dismissed and passes the angry and grieving father, Gidi who has also arrived at the scene. Miki and his colleagues pick up a suspect, tie him to a chair and violently beat him up. He receives a call from his superior and to let the suspect go. He is dismissed from his duties after a video of the beating goes online, but as a citizen he goes after Dror himself, believing that he is the perpetrator. Gidi kidnaps both men and ties them up in his newly rented basement apartment, discreetly rented in the middle of nowhere for the purpose of revenge. Gidi plans to torture a confession out of Dror before he kills him. Miki meanwhile has doubts that Dror is really the paedophile child killer.

In recent years Israeli horror films and thrillers have set themselves apart as cult horror films. The zombie Cannon Fodder (2013), as well as Rabies (2010), made by the same team as this film, Aaron Keshales and Navot Papushado are cases in point. Where some of these films differ from the normal Western/European perception of Israeli films is that they are not particularly political and are often set in woods and forests rather than desert or the coast. Big Bad Wolves could have been filmed anywhere really and apart from a reference to rented house being near Arab villages and therefore makes it cheaper, there is little in the way of politics in the film. But it does have plenty of black humour and a well handled chase sequence through backstreets as Miki chases Dror.

The plot may not be wholly original, this is an interesting and at times even a challenging film. Released by 101 Films, this is the first time Big Bad Wolves has been released on Blu-ray since it was originally screened at the 2013 London Frightfest. The transfer looks good and there is a featurette on the disc that covers the making of the film, as well as the background into the film.