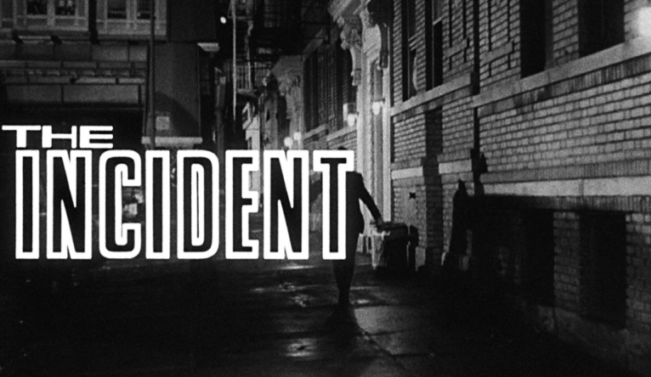 The Incident (1967) is a gritty, urban indie drama filmed in black and white by Gerald Hirschfeld, whose previous black and white work was on the tense Cold War thriller, Fail Safe (1964) which added to the film’s atmosphere. (He would also go on to shoot Mel Brooks’ Young Frankenstein, 1974 in black and white.) Director Larry Peerce, a director from TV would never really go on to fulfill the potential displayed in this film, apart from a couple of efforts in the early and mid-1970s. He would then go on to mostly make TV movies and he certainly at no point returned to the grittiness of The Incident; the script was written by Nicholas E. Baehr, a screenwriter also exclusive to TV work. The film is also known for the number of name actors in it in the early stages of their own careers, as well as a couple of veterans.

The Incident is set over one Sunday evening in the Bronx with trouble brewing and being created by a couple of young punks (Tony Musante and Martin Sheen in his first film role), out looking for trouble. Before they hold a subway carriage of passengers hostage, they also hassle a pool hall owner for closing early as it’s a Sunday night, harass a couple and beat a man unconscious for just $8. We are then introduced to each of the passengers of the train carriage including an older couple out for the evening, a mousey man and his wife, a black couple, a gay man, a sexually aggressive young man and his girlfriend as well as a couple of soldiers on leave, including one with a broken arm (played by a young Beau Bridges). When the two young punks enter the subway train at 170th Street, they begin to harass and torment all aboard, refusing them the ability to leave the train. Meanwhile the train passes through station after station passing through the Bronx and Manhattan.

The film belies the traditional Hollywood impression of New York in the 1960s as normally represented in films that wasn’t the dangerous, rubbish strewn urban jungle that would perhaps later seen in Scorsese’s Taxi Driver (1976) with its sex shops and peep shows around 42nd Street before Mayor Giuliani cleaned it all up. Hirschfeld’s stark cinematography adds further to the films atmosphere, urbanity and even tension. But it is also the now familiar faces, including a young Bridges, Sheen, Musante (who had appear in the classic giallo thriller, The Bird With the Crystal Plumage, 1971) as well as some veterans and other well known faces including Thelma Ritter (the gossip in Rear Window, 1954), Ruby Dee (A Raisin in the Sun, 1961), Jack Gilford (A Funny Thing Happened on the Way to the Forum, 1966), the former Mr. Bette Davis, Gary Merrill, Jan Sterling and a young Donna Mills (who would appear in Clint Eastwood’s Play Misty for Me, 1971 as well as becoming the darling of TV movies and TV soaps).

The Incident is not a film that has been widely seen, but how interesting that Eureka Entertainment should release it in their Classics range with a High Definition transfer. It also has the added benefits of two audio commentaries by film critic and writer Alexandra Heller-Nicholas, as well as one from the director, Peerce and Film Historian Nick Redman. There is also an interview with Peerce conducted at the 2017 Wisconsin Film Festival, as well as a trailer and accompanying booklet.