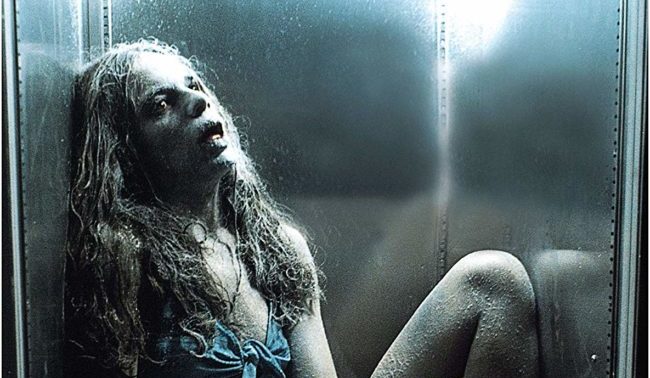 Body horror is the best way to describe David Cronenberg’s films. He had begun his carer by making a small handful of very low budget student films that have grown a cult following over the years. But it was Shivers (1974) that brought him to the attention to a wider audience. It’s unlikely Cronenberg’s films would have been made or given attention were it not for the early films of George A. Romero and especially Night of the Living Dead (1968). Between them, Wes Craven and Tobe Hooper were forging and creating a new style of cheaply made, but very effective horror films in the early 1970s. What sets Cronenberg apart (besides being Canadian that is), is the visceral body horror in his films and have appeared since these early features.

Shivers is set in a new luxury tower block, but parasitic worms are feeding their way into their psychotic hosts until they spread a zombie-like virus. This theme was repeated in Cronenberg’s next film, Rabid (1977), now released on a restored version by 101 Films. Rabid begins with a motorcycle accident involving Hart (Frank Moore) and his girlfriend, Rose (played by porn legend Marilyn Chambers). The nearby rural plastics surgery hospital is run by a Dr. Keloid who takes them in for surgery and care. Hart only has superficial injuries, but Rose seems in a daze following her coma. When anyone gets near Rose and she goes to hug them, a penile shaped probe comes out of her armpit, from what looks more like a sphincter or vaginal shape break in the skin and penetrates its victim. A number of casualties crop up (including the one found in the freezer that is seen on the poster and the sleeve of the 101 release), but thus far Rose is not a suspect, even though she escapes from the hospital. Drained of blood, the vitims soon become rabid zombies, attacking their victims and spreading the disease with rabid Rose of course the carrier.

Rabid does have that grungy 1970s horror look to it that has not gone away on the Blu-ray High Definition. What is clear from these early Cronenberg films is this was a director developing his own visual language that, while it references the likes of such contempories as Romero and John Carpenter, he was in no way a copycat. However, unlike the imagery, some of the acting and dialogue is often laughably stilted and amateurish. Nothing in that sense is unusual about Rabid, but it does move at a good pace and develops well with a great ending.

Released by 101 Films this is a full package fronted by a wonderful sleeve cover showing off the iconic poster for the film with the body in the freezer. Inside there is a booklet containing essays, as well as on the extras including a brand new commentary by filmmakers Jen & Sylvia Soska and others by Cronenberg himself, Cronenberg writers, William Beard and Jill C. Nelson. There are also archieved interviews with the director and actress Susan Roman. Significantly, there is also a new documentary called ‘ The Quiet Revolution: State, Society and the Canadian Horror Film Part One: Gimme Shelter: Cinepix and the Birth of the Canadian Horror Film’, a feature length documentary that looks at early exploitation and horror films from Canada in the late 1960s and early 1970s. The timing of the release is also interesting of course as it comes out at the same time as a 2019 remake of Cronenberg’s, released only last week.