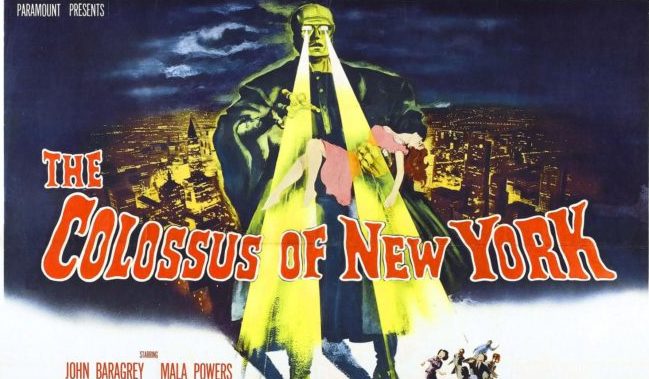 The Colossus of New York (1958) is essentially Frankenstein for the Atomic Age. Nearly all the elements of gothic horror have been stripped away from this variation on Mary Shelley’s creation save a big mansion house, a lab and a brain in a tank of water. The gothic horror had all but disappeared in post World War Hollywood, only to be superceded by the science-fiction genre, especially in Hollywood and Japan in the 1950s. Of course there were low budget Frankenstein stories in the 1950s, including Frankenstein’s Daughter and Frankenstein 1970 (both 1958), the latter of which starred Boris Karloff. But these pailed next to the Universal horror film of a generation before. The Golem story, made for the silver screen through several versions in Germany through the silent years and in many ways is perhaps closer to that than the Frankenstein story.

The film is a very trim 70 minutes and moves at a decent pace. It begins with Jeremy Spensser (Ross Martin) arriving in back in New York and welcomed by his family after he has won a an international peace prize for his working in stop global famine. Leaving the airport, he is accidentally run over and killed while running into the road to get his son’s toy plane. The family are of course distraught, and Jeremy’s scientist father (Otto Kruger) has secretly retrieved his son’s brain and has it in a jar with a bunch of electrodes keeping the old blood running to it. He reveals this to his other son, Henry (John Baragrey) who is shocked at what his father has done. Not half as shocked though at discovering that he has build an almost 8 foot robot with a cape to stick the brain into. When the work is finished with Henry now on board, they plan for robot Jeremy to continue his work.

Naturally when the work is done with a now screechy voiced Jeremy awoken and shocked at what he has become, he will take some time to get used to what he has now become. The problem is, he doesn’t get used to it and instead a darker malevolent side comes out with newly acquired extra sensory perception and a violent temper. ‘Jeremy’ runs amok using mesmerising powers on the professor and hunting his brother down having learnt that Henry is in love with his wife (Mala Powers). The final showdown occurs in the United Nations Building (giving some credibility to the title).

Of course this is a B movie with the usual array of heroes, heroines and characters are fairly cardboard cutout. Kruger, a mainstay character actor and well cast as the selfish Professor. But the real star of the show of course is the Golem like robot, replete with cape, big hands and a non-too friendly face. He is in places genuinely terrifying with his screechy and crackly voice (voiced by Martin) and cold malevolence, or as the Professor states, without a soul. There is also the haunting silent movie like piano score that adds to the films sense of eeriness. It’s a film that has often been neglected, but one with many qualities, even if one or two of its premises are silly, but in the end it is the spectacle and horror that counts. And on this, it scores well. The only extra on the disc is a commentary by The Dark Side magazine editor and writer Allan Bryce and David Flint.