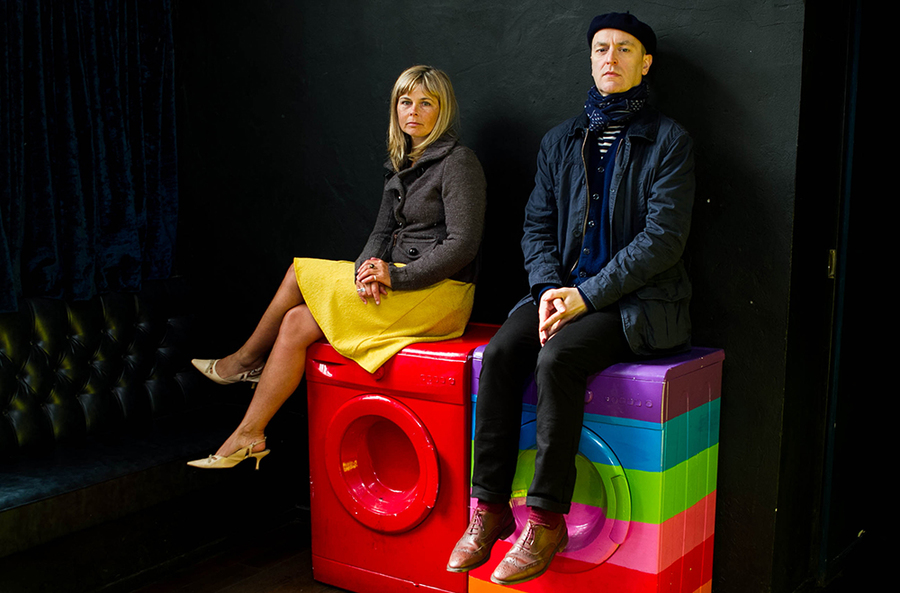 This year’s Edinburgh Art Festival came to a heady climax with the second edition of Jupiter Rising, an art and music festival hosting a refreshingly diverse array of interdisciplinary artists in the spectacular setting of Jupiter Artland, a sculpture park in private grounds a few miles outside the city.

While I have often complained about the tired lineups of bands and ageing DJs that Scottish festivals habitually attract, Jupiter Rising was unusually well curated and thought out, by people who clearly know and understand what’s going on at the cutting edge both at home and abroad, with the Glasgow underground representing in full effect.

The festival opened in style with a performance centered around a swimming pool designed by Joana Vasconcelos, with Carlos Maria Romero leading a dance trio camping it up in lycra and heels to a soundtrack from Steven Warwick. If the music was more minimalistic techno than we’d normally expect from Warwick, who at one point availed himself of the pool to float and on a lido and repeat ‘I’m sorry’ to the audience, it set an appropriate mood for the weekend, in its playfulness, site specificity and embrace of gender fluidity.

From here we were led to the main stage, a colourful big top where the main act on the Friday night was Glasgow indie legends The Vaselines. They may have been around for so long that Kurt Cobain has covered their songs, but Eugene Kelly and Frances McKee were still game for playing such innuendo-laden favourites as Monster Pussy and Molly’s Lips, even through a cloud of moths that were infiltrating the tent.

We were here to find the cutting edge however, so we went off into the woods and found it with Cucina Povera, the alter ego of Finnish musician and ex-Glaswegian resident Maria Rossi. Her music was as minimalistic and mantra-like as always, foregrounding her yearning vocals (in Finnish) over layers of synth loops, but seeing her perform on the OH141 stage – essentially a DJ box blending into a tree brilliantly designed by Furmina Ahmed – only accentuated it’s eerie electro-pastoral qualities. OH141 itself is a Glasgow-based club which has challenged structural racism and sexism in club culture run by Sarra Wild, who programmed a great lineup, headlined by herself on the Saturday night, where she nearly upstaged the tracks by obviously enjoying herself so much on the decks.

Karen Gwyer’s headline set in the big top really stole the show however, a raw, remorseless but unpredictable and constantly inventive analogue techno set that had people dancing on speakers and attempting to invade the stage at one point. When the crowd attempted to take her hostage by chanting ‘One more tune’, she apologised that she didn’t have one, but gamely improvised a track to see them lose themselves in further abandon.

One of the joys of Jupiter Rising was that it wasn’t simply all hedonism, but that the music and art on display could be seen as taking part in a larger sociopolitical context. For instance, one could wake up on the Saturday morning and watch the Otolith Group’s film The Third Part Of The Third Measure, a double screen work exploring the music and thought of Julius Eastman in preparation for a performance of his music. Completely marginalised throughout his short life for his outspoken views on race and sexuality (while calling pieces Gay Guerilla or Crazy Nigger may have given them brilliant titles, it was only going to further alienate the uptight world of contemporary classical music), the film is one more step in reclaiming the legacy of this groundbreaking figure who turned his back on John Cage to get down with Arthur Russell.

While the afternoon offered a full programme of angsty queer punk and Goth bands, we chose to explore the beauty of the place itself, where you could stumble upon major sculptural works from Anya Gallacio or Phyllida Barlow. Some chose to wild swimming in the lake to get a better view of Christian Boltanski’s Aminitas shimmering on its islet; we just hung by the lake and perused some political literature from the fanzine library. The whole thing was beginning to feel like some alternative Edenic experience, where everyone was really chilled and gender fluidity may have been the norm rather than the exception.

Another stage was set up for the Saturday, in the shadow of a stepped piece of  land art by the preeminent architecture critic Charles Jencks. This was a perfect setting for Eric Chenaux to play the perfect Saturday afternoon comedown set, a woozy set of conventionally well-structured, beautiful songs which he contorts into weird new forms with detuning and virtuosic passages of improvisation, in the process threatening to totally break them down. He closed on the fragile intimacy of a ten minute epic, Wild Moon, before announcing he wanted to go see the Julius Eastman. We followed.

The Eastman pieces were performed by Elaine Mitchener backed by classical ensemble Apartment House, and great as it was to hear Stay On It, maybe the most powerful piece was Frederic Rzewski’s Coming Together. Another underratedmilestone of minimalism by one of Eastman’s contemporaries, Coming Together is based on the prison letters of Sam Melville, one of the leaders of the infamous Attica Prison riot, during which he was killed. The text repeats phrases where Melville tries to reassure his correspondent (and himself) that his life is in order and going fine, the phrases’ banality being brutally exposed by their incessant repetition and the tension-building acceleration of the instrumentation, Mitchener delivering it in magnificently controlled and intense fashion.

Another confrontational performance was to follow, form Edinburgh Leisure, the duo of Keith Farquhar and Tim Fraser continuing their own ongoing, mordantly witty struggle against the banality of Edinburgh’s civic society. This was a welcome return to their older, guitar-based material, ‘the hits’ as it were, with Farquhar using optional masking-tape ripping percussion which he had to goad toe soundman to achieve the correct levels on, making it sound like the gates of Hell ripping as it coiled in mounds at his feet. A perfectly absurdist accompaniment to such tracks as their barbed attack on the privilege and cynicism of the art world, Dada’s Boys – the audience kept their distance and stood well back. Though everyone surged down the front again for the considerably more crowd pleasing Cate le Bon.

Saturday night climaxed with a double whammy from Total Leatherette and the Comet is Coming. If the former band are considerably less well-known than the latter, it may be partially because they relish obscurity, choosing to play in the folds of darkness with the lights out in the Jencks tent. Former denizens of the Glasgow underground who decamped to Berlin, it was great to have them back, their deliberately disorientating take on EBM boasting beats as razor-sharp as ever through the sinisterly sleazy mutterings.

Last time I saw The Comet is Coming, I thought ‘I’d love to see this band play a festival’. Here, they certainly went for it, though some of the subtlety of their music was lost in the frenzy. If the band normally come on like the progeny of a collision of the Afrofuturisms of Sun Ra and Underground Resistance, here the latter won out, although their tremendous sax player Shabaka Hutchings is undoubtedly a star in any context. If Blood of the Past functioned on record as backing for spoken word by Kate Tempest, here it was skronked up to the max, to receive deafening cheers from the audience. If Unity is normally presaged by keyboardist Dan Leavers calling for unity, here he called for the death of our Prime Minister, a proposition which certainly united the crowd. If The Comet is Coming always play with Dystopian and Utopian visions of the future, here the Dystopian definitively won out, ending with a rendition of Neon Baby turned up to 11.

Certainly, if this is going to be the end of the world as we know it, I can think of no better band to soundtrack the apocalypse, though I hope it continues for some time yet, if only return to a future iteration of Jupiter Rising next year. As this festival triumphantly reminds us, another world is possible.