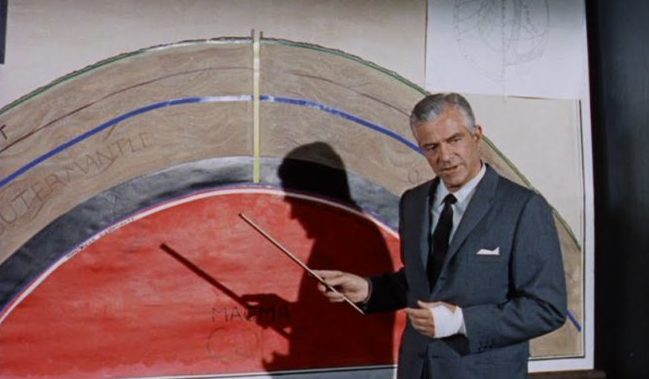 Crack in the World (1965) came towards the end of a spate of nuclear age science-fiction movies that had seen a whole bunch of films building a whole genre since about 1950. This approximate 15 year cycle of films had created disaster to the planet, often awaking some giaint beast long thought extinct (in such films as The Beast From 20,000 Fathoms, 1953 or the Godzilla films from Japan) or changing the weather or condition of the planet in such films as The Day the Earth Caught Fire (1961). A game changer came in 1965, the same year as Crack in the World with The War Game, a BBC docu-drama by Peter Watkins which still has the power to shock audiences today, let alone from those who were living under the fear of the bomb at the height of the Cold War dramatising what effects a nuclear war would have.

In Crack in the World, scientists are wanting to use an atomic bomb to harness the Earth’s energy deep below the Earth’s surface and in the Earth’s crust. Scientist, Dr. Peter Sorenson (Dana Andrews), a terminally ill scientist due to his exposure to radiation in his pursuit of science. He works for an organisation known as Project Inner Space, an international consortium of scientists based in Africa. His theory is that they would penetrate the Earth’s magma core with a nuclear bomb in order that they can harness the energy for power. However, the project’s chief geologist, Dr. Ted Rampion (Kieron Moore) warns that this act will be dangerous and will create unknown problems for the planet and will in all likelihood create a crack. Soreneson goes ahead regardless and drops the bomb. Nothing happens at first, but within days a crack begins to form. Rampion calls on all scientists and nations in the world to come together to stop what could lead to the Earth’s destruction. His plan is to use another thermo-nuclear device to reverse the spread of the crack.

What can be seen as part science-fiction, part disaster movie, this film pre-dates many of those disaster movies that cropped up in the 1970s. Much of it is set in the underground facility of Project Inner Space that can be best described as a low budget James Bond or The Andromeda Strain (1971) facility, or more realistically closer to the desert facility in ‘The Time Tunnel’ science-fiction TV series. It does of course use a lot of faux science gobbledygook, but some of the energy of the film is sucked out of it a little by the meange ménage à trois relationship between Sorenson and his wife (Janette Scott) with Rampion; few old films had the guts not to have a love interest.

The special-effects are very good for the age of the film and stand the test on this Blu-ray release, the first time the film has been released on this medium. Shown in the original 1.78:1 aspect ratio also adds to the films good look, although, as ever there is a risk with HD transfers this will show the cracks (if you’ll excuse the pun) and sometimes cheap sets.

This film adds to 101 Films range of classic sci-fi films, nicely illustrated with an original poster for the film on the sleeve. The only significant extra on the disc is a commentary by Dark Side Magazine editor, Allan Bryce and Richard Hollis who discuss the film and especially acknowledge the film’s wonderful special-effects.