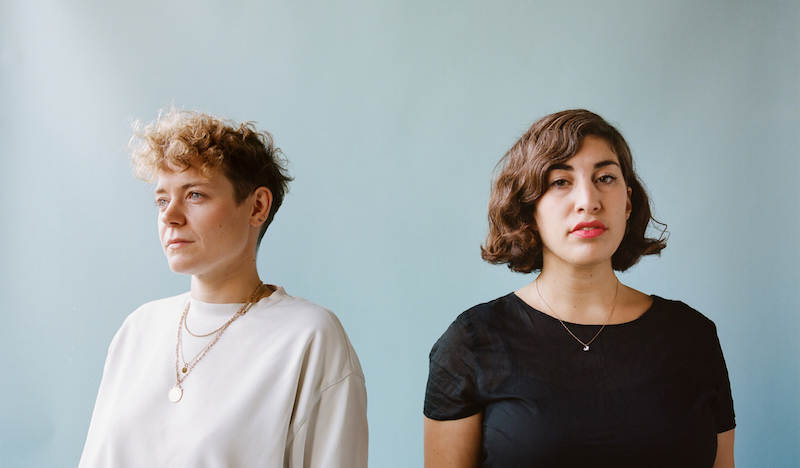 London-based duo Peggy Sue, made up of Katy Young & Rosa Slade, are back with their new album Vices, which is set for release Feb 21st via French Exit. Today the band are sharing the first single & video from the record “Motorcade“.

Taking its queue from 90s garage rock, “Motorcade“ is a blissed out break-up anthem that rushes from tender to dismissive and back again.

“Motorcade is about recognising the difference between what you need and what you want,” says Young “and asking for it as fast and loud as you like. I wrote it in the first wave of relief after a big break-up – it was probably the first moment that I was ready to be a bit mean and honest about it all. When we started arranging the song with the band it just kept getting louder and faster and more powerful, now it’s this burst of energy that we’re terrified of playing live but always love every second of.”

The video for “Motorcade” was made with artist and friend Catherine Repko, with footage by Repko, Zora Kuettner and Katy Young.

It has taken Peggy Sue four years to work through all of their Vices. The London band’s upcoming fourth album, due February 21st is their first full-length release since 2014’s Choir Of Echoes. Its ten tracks are bittersweet tales of love and distraction, as simple as they are powerful, and irresistible in their combination of tender harmonies and stark, cautiously optimistic guitars. Vices borrows from the perfectly constructed pop songs of the 1960s, and the understated, noisy anthems of nineties bands like Blur and the Breeders, and it is a self-assured return to the very essence of Peggy Sue.

During their last headline tour, for Choir of Echoes, Peggy Sue were playing to the biggest crowds of their career. But for Katy Young and Rosa Slade, life intervened, as life often does, and they found themselves needing to take a break from the band they had been in since they were teenagers. “We needed to step back from it,” explains Young “and when we came back together, we realised that the way we’d been doing music wasn’t necessarily all that good for us, or for our friendship. We had to rethink how we did it, to make it that positive thing for us again.”

They looked back to their early days, as a duo, and stripped everything right back to its bare bones. So instead of the practice room, they started working on new songs in their living rooms – the first time they had written together that way since their debut album, Fossils and Other Phantoms. They quickly remembered that it suited them.

The pair also took inspiration from Deep Throat Choir, the 30-strong singing group, which both have performed as part of for the past four years. “It’s been such a powerful thing to be part of, to remember how exciting and joyful just singing together is, and to see how much strength you can take from one and other,” says Young.

Those days of sketching out songs on home recordings eventually led to the ten tracks of Vices. “We did little trips to Berlin to make some demos with our friend Ben,” explains Slade. “Previously, making a new album would have been a very planned out trip to a studio, and we’d do it in a number of weeks.” This time, it was more organic, more natural, and far less prescribed – though admittedly a little slower. Alongside Ben Gregory (Grip Tight) on bass, they recruited drummer Dan Blackett (Landshapes), and Euan Hinshelwood (Younghusband), and brought long-time collaborator Jimmy Robertson back on board to produce (Choir of Echoes, Peggy Sue play the Songs of Scorpio Rising). They recorded in small bursts in studios around London, paying visits to Soup Studios and Press Play on days off from their day jobs, and putting the finishing touches onto songs on evenings and weekends at Hinshelwood’s Vacant TV, Robertson’s Bee and Smoke Studio and in Blackett’s north London flat.

Peggy Sue have always looked to the darkness as well as the light, often playing each side of the coin out in the same song. The album cover art, a photograph of a glass of orange juice by Joana Polonia, taps into that fundamental equivocation, which is such a big part of Vices. “It’s so bright and full of energy and light,” says Young, of the photograph. “That’s the simple energy we wanted for this album. But we also loved the ambiguity of it as something that could equally be a vice or a remedy.”

Vices was a working title initially, but it soon came to feel as if it suited the record in its entirety. “Lots of songs on the record are sort of messed-up love songs for things that feel good, but aren’t necessarily good for you – like getting staying out too late, or taking too much comfort from certain people,” Young explains. “That kind of interplay between the positive and the negative has always been in Peggy Sue songs, but it’s particularly true of this album. It’s about the things you do to lift you up when you’re down or distract you when you’re sad, that can end up circling back.”

After four years, Peggy Sue have found themselves again. “I know, from looking at your mouth, how you’re going to sing something,” says Slade, addressing her bandmate; “I know what harmony to add. We’ve been singing in Deep Throat Choir, and it’s beautiful to be among those voices, but your voice is the voice that I know the best.”

“We’ve never had an album that bookmarks such an incredible period of time,” says Slade. “It’s a really powerful thing. It has seen us through very difficult times personally, and as a band.” That Vices has ended up sounding so positive and so celebratory is a testament to the power of the songs that emerged from those living rooms.