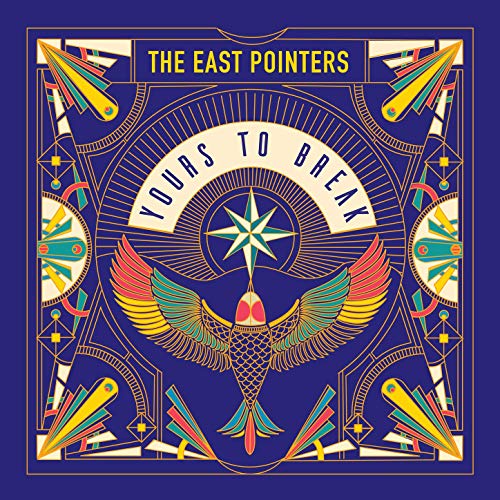 The East Pointers – Yours To Break

Yours To Break is the third album from Canadian trio The East Pointers. It moves the band’s music from traditional folk towards a more modern and pop-edged sound, with some great vocal harmonies on display. The album’s ten tracks include a number of instrumental numbers as well as those with vocal parts.

The East Pointer are Tim Chaisson (vocals, fiddle and percussion), Koady Chaisson (banjo, tenor guitar and moog) and Jake Charon (guitar and keyboards). The band hails from Prince Edward Island on Canada’s east coast, a rural province close to Nova Scotia historically home to many settlers from the UK. There is a traditional Celtic core to their music, a Scots/ Irish folk sound but with clear Americana influences, based around fiddle and banjo. What makes their approach different to most folk bands is the prominent guitar melodies and rumbling bass lines that underpin many of the tracks.

The album’s title refers to a sense of community and family as a foundation that can be built upon or broken from. Perhaps this also refers to their musical approach, as the band seeks to develop its musical approach without losing its roots. The excellent opening track and lead single Wintergreen typifies this, describing light coming through darkness, giving a clear sense of growth and hope in difficult times. More than a folk song, the vocals and instrumentation work well together in an upbeat and melodic track.

Halfway Tree is also very good, the vocal harmonies working well on a slower track with a feeling of resilience that builds to a big finish. Elmira has a wistful air, the melodies backing higher pitched vocals in an emotional song of loss and regret.  Mystery Cove comes closest to a pop sound, its big chorus standing out.

This is a lively and interesting album, and many of the songs are open and accessible, with a wide potential audience. The East Pointers are all fine musicians and the sound quality on the album, produced by Canadian multi award winner Gordie Sampson (LeAnn Rimes, Carrie Underwood) is excellent. Some of the longer instrumental numbers may be more limited in appeal though, aimed at hard core folk fans. But if this is your type of music then you’re going to love it.