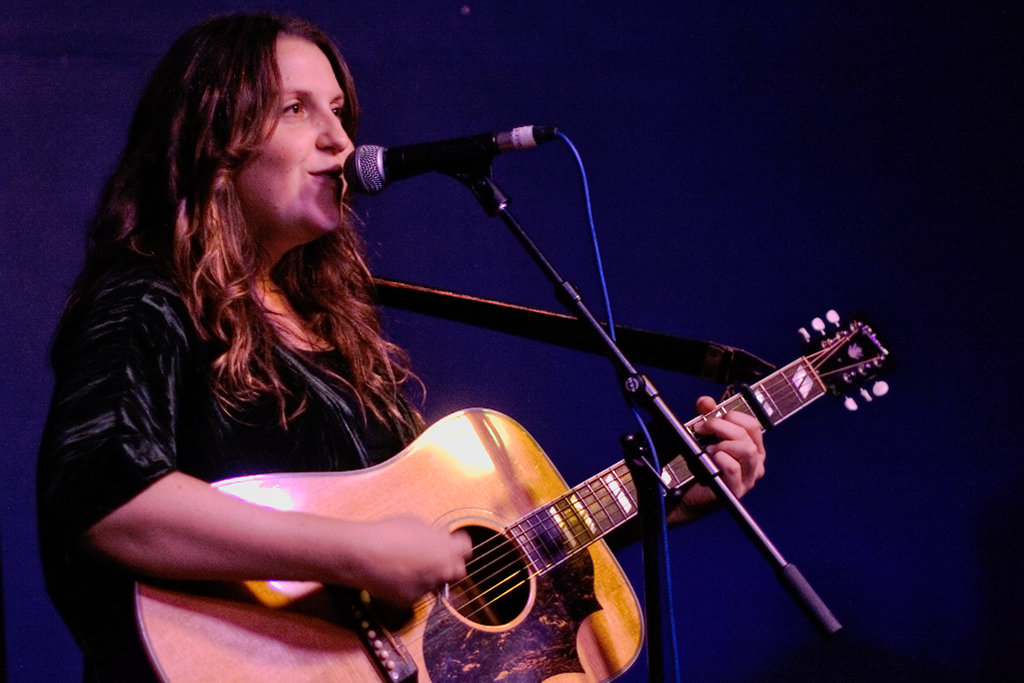 American singer songwriter Caroline Spence returned to Glasgow for the second time this year in fine style. After a support slot with Steve Forbet at Celtic Connections in January, she now headlined with an excellent new album, Mint Condition, to promote, and entertained a large crowd at this intimate venue with a very good performance.

The night was opened by Roseanne Reid, the support act across the UK tour. The Edinburgh songwriter is the daughter of a Proclaimer (I forget which one…) but has her own style of sparse and emotional country tinged acoustic songs. Her short set went down very well, especially the excellent Amy from her debut album Trials – a song that won an international songwriting competition in Nashville. The tender love song Till Kingdom Come, written to perform to her wife on their wedding day, was also very good. Roseanne Reid is clearly a name to remember.

Caroline Spence was suffering a little from the vocal strains of a long tour, but she still produced an excellent set drawn from her most recent two albums. Backed by lead guitarist CJ Hillman, her beautifully constructed acoustic songs were delivered with typical emotional intensity. Spence has a sublime voice, sweet and dripping with southern charm, and her occasional vocal issues didn’t detract from the quality of her performance.

The set opened with Long Haul from the new album, a slightly slowed down version adding a wistful feel to the road song. The more up tempo Angels Or Los Angeles and Slow Dancer from 2017’s Spades And Roses raised the temperature with bigger vocal performances. Hotel Amarillo was excellent, the song preceded by a story about driving across Texas, and featuring some nice lead guitar work from Hillman.

Spence then played two exquisite slower solo tracks. The love song All The Beds I’ve Made was just beautiful and the haunting Sit Here And Love Me was a highlight of the set. This very personal song, which she described as difficult to play, is heartbreakingly honest and received a great response from an audience that was hanging on every word.

Guitarist Hillman returned to the stage to add his Telecaster to Wishing Well and Song About A City before Spence’s soaring vocals on Wait On The Wine provided another highlight. Who’s Gonna Make My Mistakes featured an unscheduled midsong break, to which Spence responded to in a lovely self deprecating manner. The closing Mint Condition ended the night on another high point. The excellent song written from the viewpoint of her grandmother (or meemaw in Virginian terms) was quite beautiful.

Caroline Spence is both a fine songwriter and an excellent vocalist. She marries very well crafted lyrics with a voice of real quality and the audience was left looking for more. Unfortunately there was no encore but hopefully she will return soon to entertain her growing Scottish fanbase once more.