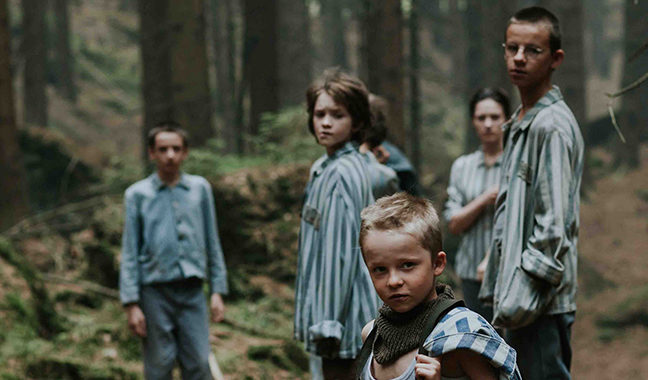 There have been many films made over the years that have tackled the Holocaust and survival through it as subject matter . As stories of human endurance, there are few stronger subjects. Most famously of course is Steven Spielberg’s Schindler’s List (1993), but of course the chief protagonist of this powerful film is a Nazi industrialist who in the end helped his slave workforce in Krakow. Poland has a central place in the Holocaust where all 6 of the major extermination camps were located, with Auschwitz being the main one. Train lines were rerouted and networked to provide greater efficiency to this industry of death. Poland as a country has spent many years in coming to terms with the history of what happened on their soil, including the country’s own anti-Semitic past and treatment of their Jews.

Many Polish films on the subject have largely dealt with survival after the liberation of the camps, perhaps the best known being Andrzej Wajda’s Landscape After Battle (1970). The Warsaw Uprising in 1944 has also provided powerful subject matter in such films as Jan Komasa’s Warsaw ’44 (2014), a subject also dealt with in Wajda’s early film Kanal (1956). But the new Polish film, Werewolf (2018) (released in Poland under it’s original title Wilkołak) is closer in relation to the Australian-German co-production Lore (2012) directed by Cate Shortland. Lore is set in May 1945 right at the end of the war in which a teen girl and her siblings find themselves alone with their Nazi parents either dead or interned. They hide out in the Black Forest, eventually journeying 900km across Germany in search of family in Hamburg.

Werewolf tells a similar story, but from an opposite perspective. Again, it is May 1945 and the concentration camp system is collapsing. In the Gross-Rosen camp in south west Poland the SS guards are clearing it and systematically executing prisoners and setting the dogs on them. A boy, the bespectacled Wladek uses his tenacity for survival and with all the other children in their barrack carry they carry out exercises to the laughter of their SS tormentors. The next day, stunned Soviet liberators arrive at the camp and the children are liberated. The 8 children hide out in an abandoned large house in nearby woods and struggle for food and survival. The lead of the group is Hanka, a 20-year-old. Due to their dehumanisation living under such awful conditions they must learn how not to behave like animals. They manage to find some old tinned meat. Soon though, Hanka and the children come under attack from the freed dogs, with the younger children believing they are SS guards who have come back as dogs. They find themselves under siege from the aggressive blood thirsty dogs, as well as roaming drunken Soviet soldiers who rape Hanka and she is eventually killed. Seeing off one Russian, they also learn to survive together with Wladek who has a deadly rivalry with one of the other boys.

Children learning to survive under difficult circumstances may have a ‘Lord of the Flies’ kind of feel to it with a bit of ‘Cujo’ thrown in for good measure, but this film pits the children in circumstances many found themselves trapped in during the terrible post war months of World War 2. It departs from William Golding’s novel in that the children have had to learn how to be human again, making these children more than survivalists, but survivors. It is also a film that is economic in its settings which, filmed simply around a brick building for Gross-Rosen concentration camp and around the large abandoned house and woods in the Table Mountains of Poland near the Czech border. Indeed, apart from the architecture, some of the surroundings has an almost Wild West look to it.

The werewolf of the title refers on the surface to the mad dogs themselves, but also to the Nazi plot that was mooted after the war had ended, that Nazi saboteurs (or what would today be termed as terrorists) would attack the occupiers and fight back. These dogs certainly seem to be carrying out these actions on behalf of their masters. It is a film that very much fits with the canon of World War 2 cinema, and most specifically post World War 2 survival films that have been emerging over the past few years, even when one thinks of the recent film Ida (2013) that leaps forward even further in the tale of a Jewish woman surviving for years after the war posing as a nun.

Released by Eureka Entertainment through their spectacular sub-label Montage, showcasing new international films, Werewolf is a superb film and I personally found to be one of the most engaging releases in their catalogue to date. Other than a trailer, there are no extras on the disc.