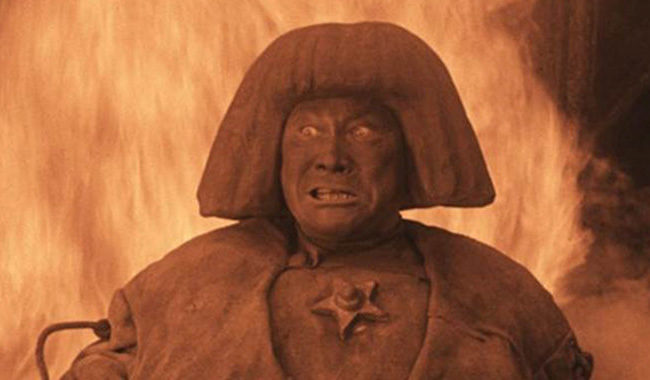 One of the challenges peculiar to silent cinema is the different versions spliced together from original releases, the worldwide hunt for missing scenes and the investigation into missing films, whole reels and sometimes a few frames. The search for the most complete version of Fritz Lang’s Metropolis (1926) is evidence of this (also released by Eureka Entertainment). This release of another classic of German Weimar cinema, The Golem (1920) makes every effort to show the film as it was originally screened when first released in Germany. However, no version of the original German negative survives. Therefore, in order to replicate that release, the Murnau Stiftung and Cinematek in Belgium have put together a film from their negative source with missing scenes from the US release, both shot at different angles. This of course creates challenges with continuity and the intertitles that this Blu-ray release on Eureka Entertainment has successfully worked around using German intertitles and a neutral font. An extra on the disc highlights very clearly the restoration comparison as it brings outs the softer tonal greys and showing greater detail than previous prints had done before with their heavy flickery contrast.

The story of the Golem is legendary in Prague and is still much in evidence around the area of the former Jewish ghetto in the city. It tells the story of the ghetto in the Medieval Period under the rule of Rudolf II when Rabbi Judah Loew created a large man of clay to protect the Jews from anti-Semitic attack and expulsion from the ghetto. Paul Wegener’s film follows the story well and accurately, as told by legend although there are variations (such as another story of the Golem of Chelmno, in present day Poland). He sets the film within the sloped rooves and tight alleyways of his perceived Medieval Prague, so distinctive of Weimar Expressionist cinema sets shot on the UFA backlot. There is also much in the way of mystical spiritualism in the film, care of the incredible production design in the film, hardly surprising given that Expressionist architect and designer Hans Poelzig was the designer.

Made by leading German film company UFA, The Golem: How He Came into the World (intended as a prequel) follows less than a year from the first key film in the canon of Weimar era films, The Cabinet of Dr Caligari, made just as World War I was finishing in this politically tumultuous and unsettling period in modern German history. In the context of what followed in the following years, it is a surprising film, given the Holocaust that followed some 20 years later. In the film we see the decadent court of Rudolf II mocking the Jews while Rabbi Loew (Albert Steinruck) predicts disaster. He begins to create and mould an oversized man out of clay. He summons the spirit of Astoroth into his creature (played by Wegener), brought to life with ancient text in a the Jewish six pointed star. At first the creature is used as a large useful servant, but the longer he has the text inside him, the more aggressive and murderous he becomes.

This was one of three films of the same story Wegener made, having previously filmed the tale in 1914, a version in 1918 and finally this one in 1920; sadly the other two versions no longer exist, long believed lost forever. But this is not the only telling of the story. The Golem also appeared in the 1936 French film, Le Golem (sometimes known as The Legend of Prague) and finally in the low budget British horror It! (1966) in which the Golem sets out to destroy the world. A more recent film, The Golem was made in 2018, a variation on the story. In an extra on the disc, critic Jon Spira asks where are the Jewish horror films, highlighting that in the rich history of Jewish culture there are many opportunities, tales, legends and texts to set stories or horror films. This has been particularly true in the case of Christian and especially Catholic and pagan faiths in which horror tales and legends have been richly told thinking of all the possession and vampire films in the canon of horror cinema and using Old Testament text. More recently both Israeli cinema and the recognition of subjects in Judaic culture have begin to emerge. Spira makes the arguement that horror films are now appearing in Israel due to the Holocaust fading from living memory.

Nevertheless, in horror films the spectre of the Frankenstein monster looms large (excuse the pun) and it has been suggested that Mary Shelley might have been aware of the legend of the Golem. Watching the film, there are also many elements that are recognisable from the Frankenstein films: the innocent child engaging fearlessly with the monster, the monster carrying off the girl (including showing affection in his own way by dragging them by the hair) and his mute violence. But The Golem also stands out in its own right as a standout film in the canon of Weimar cinema and, along with The Cabinet Dr Caligari and later Nosferatu (1922), an original in the field of the horror genre.

Although released by Eureka! before, this is an outstanding new release in this restored version that also includes the shorter (at 60 minutes) unworked US release, making for a good comparison, along with several essays on the making of the film. A worthy addition to any collection.