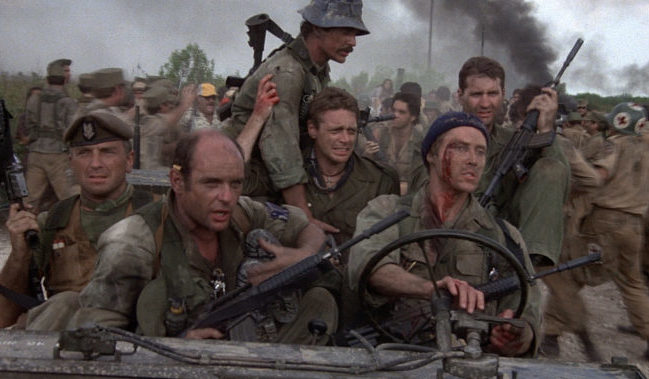 In 1978, the violent action film The Wild Geese was a successful, though critically derided film that starred a current James Bond, a couple of renowned hellraisers and a bunch of macho character actors. It concerned a businessman hiring a band of retired Paras and marines to overthrow a dictator in a small African state. It was the type of action war film that updated the kind of war adventure that had been so popular years before with the likes of The Guns of Navarone (1961) and Where Eages Dare (1969).

In 1980 a similar film, The Sea Wolves was also made in the spirit of those films with a similar cast and spirit, if lower on production values (and starring Roger Moore, David Niven and Gregory Peck). The Dogs of War was also made in 1980 and followed along as a similar storyline to The Wild Geese, but was a very different kind of film in its presentation and had no real big names in it (Christopher Walken was not yet a big star). There are only two moments of high action in the film, at the beginning and the end. The middle part is what counts. The Dogs of War focusses on the character of Jamie Shannon (Walken), an experienced mercenary who is having doubts about his future. Not quite Hamlet, Jamie is nevertheless in that same ball park as Hamlet in re-evaluating his life. The opening sees him and his comrades in arms escape from a big firefight in a Central African country, which they make it out of by the skin of their teeth. Back home he attempts to gain a relationship with his ex-wife (JoBeth Williams) and is hated by her father. He is also approached by an English businessman (Hugh Millais) who offers him money and promises of power if he gets his team together to overthrow a military dictator in the very small African country of Zangaro. Arriving in Zangaro, Shannon finds a place with a lot of suspicion. Going incognito as a photographer, he befriends a British documentary filmmaker (Colin Blakely) who gives him the inside scoop on Zangaro. Arrested as a suspected interloper, Jamie is tortured and is eventually released with information against the Generalissimo of Zangaro and the businessman who is hiring him. Meanwhile, he continues to re-evaluate his life and what he should do.

Released on Eureka Entertainment, The Dogs of War is a good film in the same spirit as many films of the 1980s that dealt with the male psyche post-Vietnam War. Although directed by John Irvin, a filmmaker who never really fulfilled his potential demonstrated here, has decent support in being produced by Norman Jewison who had made a couple of key films starring Steve McQueen and In the Heat of the Night (1967) and co-scripted by Michael Cimino, although uncredited, was fresh from success with The Deer Hunter (1977) and indeed there are some comparisons with this hugely successful film, not least of all that it stars Christopher Walken.

The action at the beginning and end of the film is well handled, but it is the psychological focus on Walken’s character that is the films driving force rather than the action. In this way, it is a very adult and mature film that has some good and experienced crew as well as a new director who never achieved his potential. Also of course, as this is a Eureka release in their Classics series, the Blu-ray release includes both the longer international cut of the film (at 114 minutes) and the shorter (104 minute release). Within the booklet, there is also a printing of Pauline Kael’s original review for the film worthy of a read.