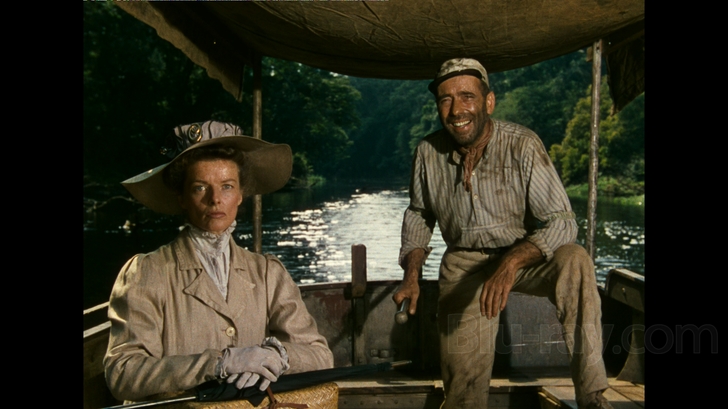 The African Queen (1951) is one of the great films and one in which the background story of the making is as famous as the film itself. It is essentially an indie film that feels mainstream, but with Huston’s freedom to make the film outside of the studio system. Director John Huston was one of the adventurers you can put in the same category as the likes of John Ford or Ernest Heningway. Huston had been a director since he made his first breakout film which became an immediate classic, The Maltese Falcon (1941). Although one of his favourite films would be The Red Badge of Courage (1951), he faced struggles with the studio MGM who massively cut the film and interfered with it. As a result Huston picked up his bat and ball and came over to the UK, setting up Romulus films with the Woolf brothers under the company of Remus (geddit it?) with The African Queen being the first film made with Romulus.

The property of C.S. Forester’s novel, ‘The African Queen’ had been mooted around Hollywood for some time with initial talk of Charles Laughton and real-life wife Elsa Lanchester in the film. This would have made for interesting casting. Humphrey Bogart and Katharine Hepburn was an equally interesting pairing and proved to be perfect. This was the fifth of six films Bogart had made with Huston. The cast and crew re-located to central Africa for location work. When the cast arrived they were very disappointed to find that Huston had disappeared to do some big game hunting (making him a somewhat controversial figure then as well as now). This would be the subject for one of the writer’s who worked on the film, James Viertel when he wrote the book, ‘White Hunter, Black Heart’, that would later be adapted into a 1990 film directed by and starring Clint Eastwood. Viertel published the book with Huston’s approval, although the two would fall out with Huston. An interview with Virtel is also included on an extra. It was this location shooting, like Trader Horn (1932) before it, that makes The African Queen so immersive. Once the special-effects are put in, however, the contrast with the studio setting is evident.

The plot of The African Queen is quite simple. It is set in September 1914, just after the start of World War One. A river trader, Charlie Allnut (Bogart) warns a missionary brother and sister (Robert Morley and Hepburn) of the approaching Germans (we are told that this is a German colony called East Africa). A short while the Germans and their colonial partners burn the village down, kill the locals and injure the brother, who dies a short while later from his wounds. Charlie helps Rosie to escape down the river. He says on board he has saved some dynamite from his old mine and Rosie convinces Charlie to use the African Queen to ram a German ship on a lake down river. Bogart finds that he has a feisty and determined passenger with him. They traverse the rapids and conditions of the river and on the journey become partners and fall in love.

The release and the packaging here on the disc is complete and suitably thorough, so typical of the best of Eureka Entertainment’s best releases. As a film, it moves at a cracking pace with no dull moments, testament to the script (chiefly scripted by James Agee), the editing and of course Huston’s direction. Although many of Huston’s films are not what could be called that of an auteur, there are nonetheless constant themes in his films, and that is the struggle of men in the world. Not necessarily macho men either, as his next film, Moulin Rouge (1952), a biopic of Toulouse-Lautrec would clearly demonstrate. Not surprising, therefore, that this was his first love story.

The extras on the disc are complete and cover the film well. It does look spectacular on the 4K restoration, though sometimes this does highlight some of the back projections and effects. There are several interviews and features on the film inlcluding separate discussions on the film are Kim Newman and Neil Sinyard, as well as other featurettes on the making on the film and an interesting audio commentary by cinematographer, Jack Cardiff.