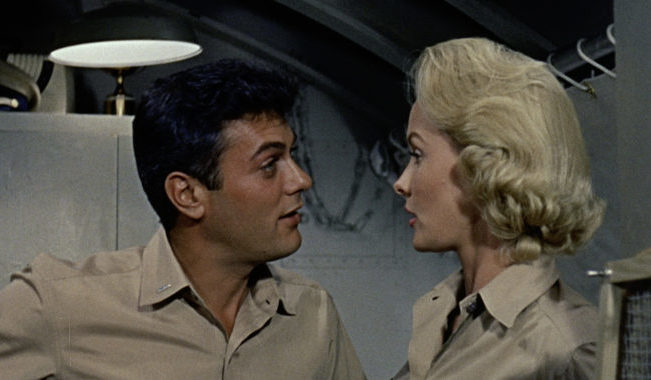 Released by Eureka Entertainment in their Classics series is Operation Petticoat (1959), a surprisingly light comedy from Blake Edwards, who is better associated with such knockabout slapstick films as The Pink Panther franchise and The Great Race (1965). Operation Petticoat is much more subtle, playing more on the comedy talent of Cary Grant, ably supported by the then fashionable heartthrob Tony Curtis (who the same year had co-starred with Jack Lemmon and Tony Curtis in Billy Wilder’s Some Like it Hot).

Although set during the first month of WWII following America’s entry to the fray after the surprise bombing of Pearl Harbor in December 1941, the film follows the fortunes of a partly crippled submarine, the USS ‘Sea Tiger’ under the command of Lietenant Commander Matt Sherman (Grant), desperate to see action. He is joined on board by a junior lietenant, Lt. Nick Holden (Curtis), a rather flash junior officer who is laughed at by the crew when he joins in his all whites. Sherman soon gets to understand that Holden, unlike himself would be happy to see the war out sat on his backside and also gets to learn there are few who are able to scavenge as well as he. This comes in handy for the crew while repairing the ship following a Japanese raid on their island in the Philippines. They receive orders to set sail when they soon have to take on board a crew of 5 stranded female nurses. This of course leads to a distraction for the men. Cue some rather dated comedy set-ups.Naturally, both Sherman and Holden find themselves paired up with two of the women with some following disasters ensuing and the war seeming to slip further and further from Sherman’s grasp.

The gags and jokes from when the women come on board take on what would now be seen as more than a little sexy with a girdle being used in place of a spring in the engine room, women’s underwear being sent through the torpedo tubes to make those depth charging them believe they have been hit, clumsy errors from the women and most famously the submarine being painted pink. If the film can be forgiven for these shortcomings of their time, this is perfect Sunday afternoon, chilling on the sofa stuff. Grant is on form as the officer being demasculated by others; he was always on form playing these sorts of characters. It nevertheless resonated with audiences and was a success at the box-office.

Other than a trailer, there are no extras on this release.