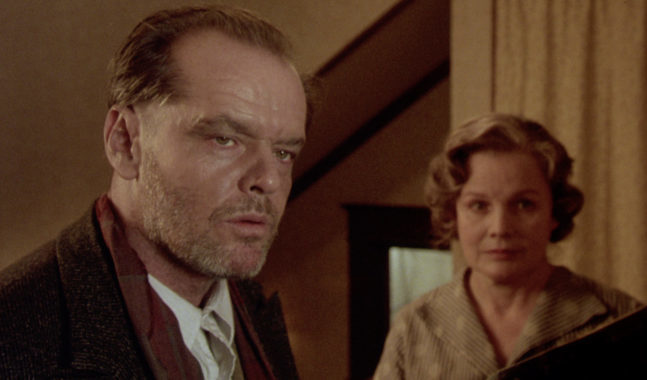 Thinking about the career of Jack Nicholson, there are some key performances set in another time in recent American history, many set during the dark days of the Depression, the years following the Wall Street Crash of 1929 until Roosevelt’s New Deal. These include films such as those in which he played private eye Jake Gittes in a scandalous LA in Chinatown (1974), repeating the role in the sequel, The Two Jakes (1990), the wandering bum who gets involved in a steamy affair in The Postman Always Rings Twice (1981) and a smaller role set during the Golden Age of Hollywood in The Last Tycoon (1976). One film in which the harsh realities of this area takes centre stage is in the underrated Ironweed (1987), released as a dual format by Eureka Entertainment in their Classics series.

The setting for Ironweed during the Great Depression works to compound the misery in Francis Phelan’s (Nicholson) life. Set in Albany, New York, Francis is an alcoholic scraping together odd jobs, sleeping in doss houses and using alcohol to numb him from both the literal and metaphorical ghosts of his past. In his youth he was a baseball player, married with children and living a respectable life. The film flashes back to significant moments such as when he dropped his son on his head causing his death and events during a workers strike in the 1910s in which he threw a stone causing the death of a scab worker. Since then he has been living on the streets, life made worse by the Depression. He has a damaging relationship with a fellow bum, Helen (Meryl Streep) who has her own damaged past and another alcoholic who is dying of cancer (Tom Waits). Francis sees visions of those he has been responsible for the death of as white spectres, which only he can see and has dialogues with. Francis is, to quote one of Tom Waits’s songs, a rain dog who is unable to find his way back home.

Ironweed is a haunting film, a poignant one and not the best known in Nicholson’s oeuvre, but one that deserves more attention. It is very well supported by an excellent cast, not least of all Streep who is well suited to the role, but also by Tom Waits, the arthouse crooner in a role well suited to his music persona. Waits proved himself to be a good support actor in the 1980s in such films as Rumblefish (1983) and The Cotton Club (1984) as well as starring in Jim Jarmusch’s prison drama, Down by Law (1986). Others in the cast include Fred Gwynne (formerly Ed Munster) as a barman, Nathan Lane as one of the ghosts and Diane Venora as Francis’s bitter daughter. There is also a solid support by Carroll Baker as Francis’s long suffering ex-wife.

The film was sadly not that well received on its release, but is just that it is getting it’s critical appraisal now. Many said that Streep’s character was underused and not as well drawn out as Nicholson’s. Nevertheless, Streep’s character is not the central character and as much as critics and audiences alike would have liked to have seen more sparring as actors, that is not what the film is about, although they had starred together the previous year in the romantic comedy drama, Heartburn. Indeed, praises to Streep for not doing this, but instead is still able to deliver a moving and heartfelt damaged character. One of the standout moments is Streep onstage singing ‘He’s Me Pal’ in which we hear the version that she would like to have sung, and the reality as a off key discordant version that everyone else hears.

The film was directed by Argentinian Hector Babenco, whose only other English language film was Kiss of the Spider Woman (1985); unfortunate given that both these films are interesting and in their own ways challenging. At 143 minutes it is a long film, but one worth the journey with few uneccesary moments and all forming Francis Phelan’s character.

Unlike in their Masters of Cinema series, in the Classics there are no extras other than a trailer, although praise should always be given to Eureka for using the original poster for the film for the sleeve art. An interesting and worthy addition to the labels growing list of titles.