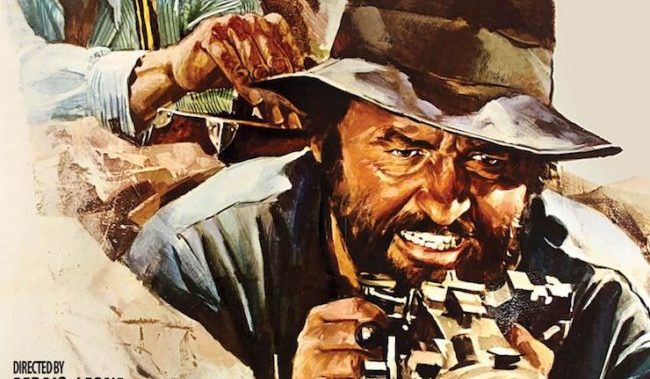 A Fistful of Dynamite (1971) was director Sergio Leone’s fifth Italian Western, or what are sometimes reffered to perjoratively as Spaghetti Westerns. It’s original title in Italy was Giù la testa (literally meaning “keep your head down”) and initially released in the US with the rather colourful and even silly title, Duck, You Sucker! It was also to date the director’s quirkiest and most ambitious film in terms of scale. Leone’s third film in the so-called Dollar trilogy starring Clint Eastwood, The Good, the Bad and the Ugly (1966) was set during the American Civil War and included some big scale battle scenes very realistically handled. In between these films, Leone had made Once Upon a Time in the West (1968), another Italian Western big in terms of scale and ambition. In A Fistful of Dynamite, however, the setting is moved to the Mexican Revolution at the turn of the 20th century. In that sense the filmsthe 1966 film and A Fistful of Dynamite have a good deal in common.

The Mexican Revolution took place between 1910 to roughly 1920 when President Madero came to power. Only one of the real key figures of the revolution is mentioned in the film, Pancho Villa, otherwise the characters are fictitious. The film opens with a quote by Chairman Mao on the violence of revolution. This is one of the running themes of the film: intellectual revolution against the realities. This quote had been removed from the original US release, but is thankfully and rightly included here. What follows is a scene with a passing peasant, Juan (Rod Steiger) being picked up by a group of bourgeois in a large wagon who proceed to mock him. They are held up and then humiliated by Juan’s bandido family. They are then disturbed by an explosion and a motorcyclist. An almost Laurel and Hardy one-upmanship between Juan and the Irish stranger (James Coburn) ensues with explosions and gunshots. He is John Mallory, a former IRA explosives expert, armed with dynamite and nitroglycerine.

These two men develop a respect for each other, but Juan recognises that John will be useful in robbing a bank in nearby city, Mesa Verde. There they see directly the effects of revolution with summary executions and imprisonment of the people. When they rob the bank (using explosives of course) they find no money, just masses of interned people. The road to John and Juan being drawn into the revolution grows, leadng to the massacre of Juan’s family and them militarising against the military. The characters in the film become disenchanted with revolution which is one of the driving messages of the film (contrary to what the censors in the USA thought given the cuts they made).

Significantly, this release is the first time that the full Italian version of A Fistful of Dollars (referred to in many of the featurettes under the American title, Duck You Sucker!) shown in the English language. The aforementioned cut version was one of the more common versions in the United States and the longer release version more widely available in the UK. This restored Italian print is the best available yet (although still missing some lost cuts originally shot). The extras on the disc reflect the different version of the film well. Released as a double set by Eureka Entertainment on their Masters of Cinema series, this release should surely go down as one of the best releases of the year in terms of package and extras giving full blooded context to the film, with many wonderful essays and interviews with the likes of Sir Christopher Frayling, Autin Fisher and Kim Newman among others. There are also separate commentaries by Frayling and filmmaker and writer on European Westerns, Alex Cox.