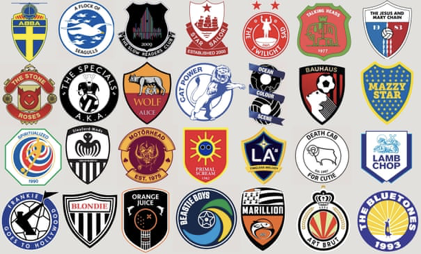 BANDS FC… IS GOING ON TOUR

Taking the football and music worlds by storm in recent years, the pop art institution with all-to-play-for will be hosting exhibitions of its work at LIVERPOOLBRITISH MUSIC EXPERIENCE over the coming weeks.

Founded in 2018 in run up to the World Cup by friends Nick Fraser, a long-term member of The Charlatans team, and celebrated graphic designer Mark Liptrott; the pair began to envisage how established club crests would look if merged with the logos of some of the world’s best loved bands.

Beginning with a crest that mashed up Liverpool FC with Echo & The Bunnymen, a rave reception made it quickly apparent the duo were onto a winning concept. Since then, Bands FC has found its way into the hearts of the nation’s avid music and football communities and has become one of the most exciting and in-demand pop art set-ups to emerge in recent times. Working with friends and guest designers, Bands FC has now commissioned over 400 original badges for some of the world’s best loved artists including The Stone Roses, The Specials, The Flaming Lips, Blondie, Wolf Alice, Primal Scream and many more. A number of artists have even requested designs for full strips and tops, from Kasabian to Franz Ferdinand, Daft Punk to Kraftwerk. A cause with conscience, Bands FC is a completely non for profit organisation with all proceeds going to charity.

The overwhelming response has seen Bands FC go on to host an exhibition at The National Football Museum in Manchester, become the proud sponsors of Brinscall FC Juniors boys’ and girls’ teams and also using their platform to raise over £75,000 for a number of charities (including the causes highlighted by the loss of The Charlatans’ Jon Brookes and Frightened Rabbit’s Scott Hutchinson). Earlier this year, they also commissioned a special series of badges for War Chid FC, an initiative that uses football as a way of helping children in countries that have been damaged by war.

Speaking about the journey so far, Nick and Mark say:
“We are by no means done yet and our plans are getting bigger and bolder by the second. Please check back regularly to stay on this crazy, brilliant journey with us. We guarantee we’ve got plans underway that are going to blow your socks off.”

Bands FC is now heading out on a tour with Liverpool-based print studio: Dorothy, for a series of planned exhibitions this Winter/Spring. Dorothy’s signature mix of music, film and literature inspired prints, products and artwork are sold and exhibited internationally. Their work has been described by the press both as “beautifully clever” and “terribly wicked”.

Eyeing up a winner, ‘Bands FC vs Dorothy’, will also show-off more of their best at Liverpool’s The British Music Experience as they settle-in for a month long residency between Jan 9th to Feb 9th 2020. Expanding on the collection displayed at Band FC’s hit appearance at the BME last year, the gallery will contain the complete set of designs so far, along with shirts and other memorabilia. The exhibition is completely free to visit and will be launched on Friday 10th January with a special live event featuring DJs and BBC6 Music’s Chris Hawkins hosting a Q&A with the designers.